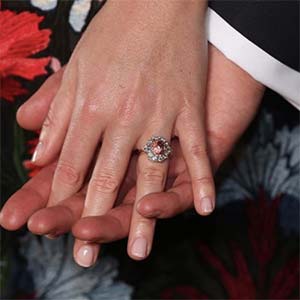 There’s a second royal wedding in the works.

And naturally, there’s another dazzling engagement ring for us to ogle—and one that’s decidedly less traditional than Meghan Markle’s three-stone sparkler. 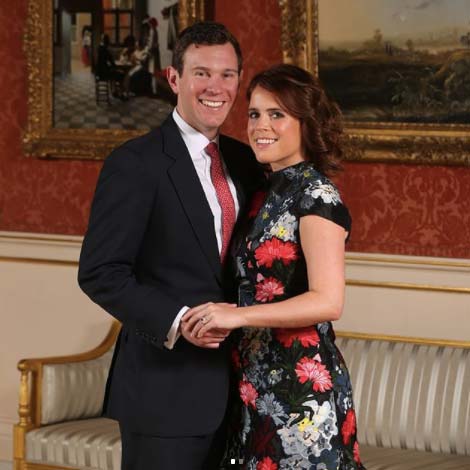 The ring’s design is quite similar to that of her mother’s engagement ring, which also features a reddish sapphire. See the two rings side-by-side here.

Kate Middleton’s engagement ring, which formerly belonged to Princess Diana, also boasts a diamond-haloed sapphire, but the sapphire is blue.

The couple will wed at St. George’s Chapel in Windsor, the same location that will host Prince Harry and Meghan Markle’s nuptials in May.

The couple was introduced by friends in Verbier in 2010, while on a vacation celebrating the princess’ father’s 50th birthday, and the pair’s been dating since. Buckingham Palace shared that they got engaged in Nicaragua in early January.

Brooksbank is a brand ambassador for Casamigos tequila’s expansion into Britain and Europe, and Eugenie is a director at the Hauser & Wirth art galleries. Eugenie is the granddaughter of Queen Elizabeth II and is eighth in line to the throne.

Her mother, Sarah Ferguson, tweeted on Monday, “Total joy!!” adding that the couple “float with laughter and love…I am so excited to have a son.”

Princess Eugenie’s father, Prince Andrew, announced in the palace’s statement: “Jack is an absolutely outstanding young man and Eugenie and he have got to know each other over a number of years, and I’m really thrilled for them.”