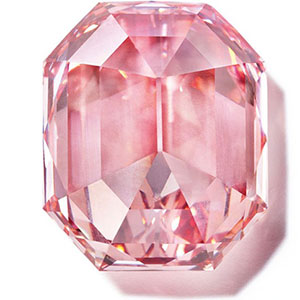 Its new owner has since rechristened the rectangular-cut VS1-clarity gem the Winston Pink Legacy.

The hammer price came after what Christie’s called “five minutes of spirited bidding” and topped the diamond’s pre-auction estimate of $30 million–$50 million.

“The room was packed solid as private collectors and dealers wanted to see the sale of the pink diamond,” says Francois Curiel, chairman of Christie’s Asia. “In the end it was purchased by Harry Winston, bidding against Vickie Sek, head of Christie’s jewelry department in Asia. There were many underbidders, all on the phone, with our Geneva- and London-based colleagues.”

The Legacy’s $2.7 million per-carat price tops the previous record holder, the 14.93 ct. fancy vivid Pink Promise, which fetched $2.1 million a carat in Hong Kong last year. But the Legacy’s overall price still fell below the $71 million garnered by the 59.5 ct. fancy vivid Pink Star, which in 2017 set a world auction record at Sotheby’s not only for a pink diamond but any kind of diamond or gemstone.

Christie’s described the Pink Legacy as “descended” from the Oppenheimer family, which formerly controlled De Beers, though it did not specify which family member owned the gem. Before its sale, the family had sold it to a private collector.

This is at least the third major diamond that has been purchased by Harry Winston since it was bought by the Swatch Group in 2013.

“We are proud to continue in the Winston tradition of acquiring the finest gems in the world,” said Winston president and CEO Nayla Hayek in a statement. “Tonight, the Winston Pink Legacy joins our incredible legacy collection, which began with the acquisition of the 101 ct. D flawless Winston Legacy diamond at Christie’s in 2013.”