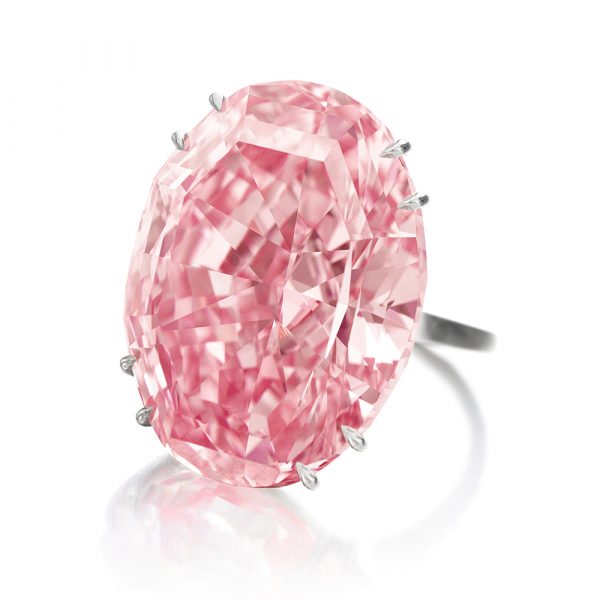 The Pink Star fetched $71.2 million (HK $553 million), the highest price ever paid for a diamond or jewel at auction, at Sotheby’s Hong Kong today.

The winning bidder for the 59.6 ct. fancy vivid pink internally flawless oval was Chinese jewelry retailer Chow Tai Fook, which has renamed it “The CTF Pink.”

The final hammer price topped Sotheby’s estimate for the stone: $60 million. It came after five minutes of frenzied bidding between three contenders.

The price was more than double the previous record for a fancy vivid pink diamond, as well as a new record for any lot sold at auction in Asia.

The previous world record holder for a jewel was the Oppenheimer Blue, which garnered $57.5 million in May 2016.

This is actually the second time the Pink Star has come under the hammer. The first time, in November 2013, it went for $83 million. That would have been a record, but the sale ended up canceled. Sotheby’s took the stone, valued at $72 million, into its inventory.

The Pink Star—originally called the Steinmetz Pink—hails from a 132.5 ct. piece of rough. Steinmetz Diamonds took two years to cut the stone, modeling the rough 50 times in epoxy while experimenting with different cuts.