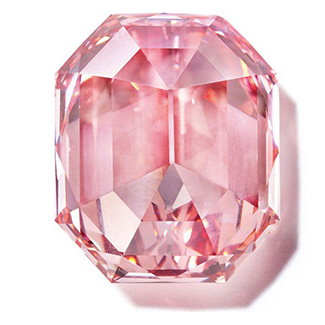 On Nov. 13, Christie’s Geneva will offer the Pink Legacy (pictured), an 18.96 ct. rectangular-cut fancy pink that is expected to fetch between $30 and $50 million.

Still, nobody doubts the Pink Legacy is a significant find. According to Christie’s, only four fancy vivid pink diamonds over 10 carats have ever been offered for sale at auction. It is also rectangular cut, traditionally a cut for white stones, and is an ultrarare Type IIa.

“The saturation, the intensity of this stone is as good as it gets in a colored diamond,” said Rahul Kadakia, international head of jewelry, in a feature on the Christie’s site. “You may see this color in a pink diamond of less than one carat. But this is almost 19 carats and it’s as pink as can be. It’s unbelievable.”

The release says the stone “descended” from the Oppenheimer family, the former owners for De Beers, and the family’s legacy helped inspire its name. However, the release didn’t specify which branch of the family owned it and whether the family is its current owner. A spokesperson did not respond to an inquiry from JCK.

While the Pink Star may be the overall record holder as far as pink diamonds go, in November 2017, Christie’s Hong Kong sold the Pink Promise, an oval-shape fancy vivid pink, for $32.4 million, or $2.1 million a carat, which set a world record per-carat price for a pink diamond.

The Pink Legacy will go on tour to Hong Kong, London, and New York City before it hits the block at Christie’s Geneva salesroom.