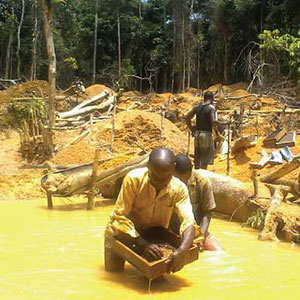 U.S. Customs and Border Protection (CBP) has modified a September order that said that any gold found to originate from the Democratic Republic of the Congo (DRC) would be automatically held at the border.

The Chambers Federation is an impact investment firm based in Royal Oak, Mich., that supplies gold to Richline and Signet. Founder Matthew Chambers tells JCK he first applied for the exemption in October and is happy that it has finally been granted. It hasn’t imported any DRC gold since last year, but now plans to brand DRC gold jewelry under the name I Am Origins.

“We were able to demonstrate how we’re sourcing, where we are sourcing,” he says.

In September, CBP said that all gold imported from the DRC would be subject to a “withhold release order,” which means it would be automatically held at the border until the importer could prove that no forced labor was involved in its extraction.

That general restriction—which has been both praised and criticized by human rights groups—remains in effect, as do the restrictions on diamonds mined in Marange, Zimbabwe, which the CBP enacted at the same time.

CBP said it’s modifying its original order based on a “rigorous evaluation” of the Chambers Federation’s due diligence program and work with various government and nongovernment organizations.

The agency said that evidence “sufficiently supports the Chambers Federation’s claim” that the small-scale mines in DRC it used to import gold do not use forced labor.

“As part of its trade enforcement responsibilities, CBP will continue to vigilantly monitor U.S.-bound supply chains for products made with forced labor,” said Brenda Smith, executive assistant commissioner of CBP’s Office of Trade, in a statement. “CBP has actively communicated with the trade community so they are aware of the risks and consequences if forced labor is found at any point in their supply chains.”

Top: Gold being mined in the Democratic Republic of Congo (image courtesy of the General Accounting Office)