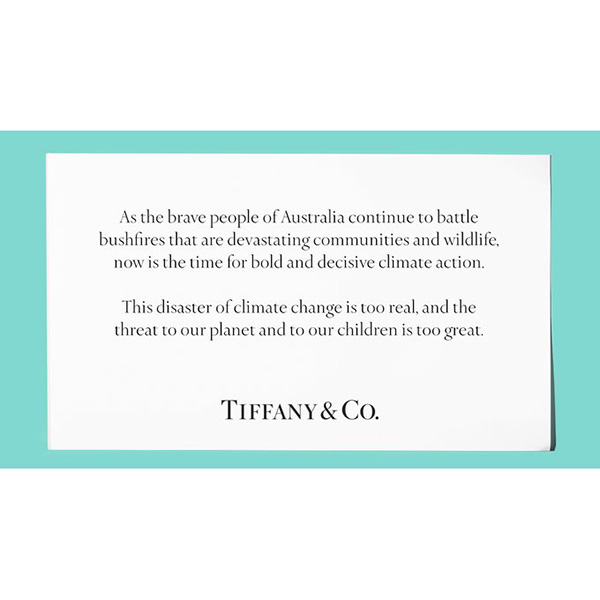 Headlined “We stand with Australia,” the ads are similar to the ones the company placed in 2017, urging U.S. President Donald Trump to remain in the Paris Agreement.

“Dear Prime Minister Morrison,” the ads read, “As the brave people of Australia continue to battle bushfires that are devastating communities and wildlife, now is the time for bold and decisive action. The disaster of climate change is too real, and the threat to our planet and to our children is too great.”

“I feel very proud to work for an organization who is willing to stand up and take action on climate change,” Glen Schlehuber, Tiffany & Co.’s vice president and managing director for Australia and New Zealand, told Australia’s AdNews.

The brushfires, which have been raging since September and have hit New South Wales, Australia’s most populous state, particularly hard, have burned an estimated 12 million acres of land, destroyed 2,000 homes, and killed 28 people, including several volunteer firefighters, and as many as 1 billion animals, according to CNN.

In response to criticism of his government’s actions on climate from former fire chiefs and others, Morrison has said that his government plans to “evolve” its climate policy and set more ambitious targets for reduction of carbon emissions.

In November, luxury conglomerate LVMH reached a deal to purchase Tiffany & Co. for $16.2 billion, which is considered the largest transaction ever in the luxury industry. Shareholders will vote on whether to approve the deal next month.