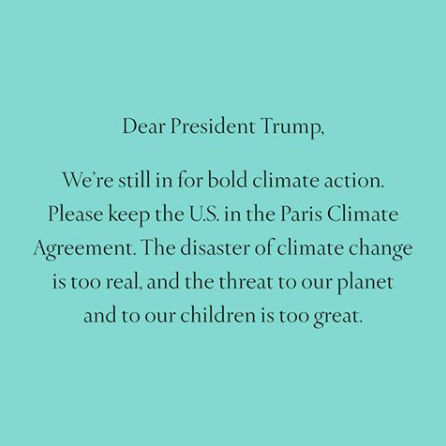 It reads, “Dear President Trump, We’re still in for bold climate action. Please keep the U.S. in the Paris Climate Agreement. The disaster of climate change is too real, and the threat to our planet and to our children is too great.”

The avalanche of comments—ranging from seething to supportive—began stacking up immediately. There were at press time close to 600 comments (and at least a dozen one-on-one arguments) running underneath the post.

“Tiffany, please keep your political opinions out of my retail choices,” wrote one commenter, “ice ages and dust bowls and oceans rising have cyclically happened before.”

Another gushed, “YAY TIFFANY!!! So many large companies with tens of millions of dollars don’t have the guts to take a stand, but you do….I did not think I could love you guys more than I already do, but here I am.”

Yet another stated, “You just lost a very dedicated customer. I have spent a small fortune in your stores, but my shadow shall never again darken the doorstep of your establishment.”

“Thank you for doing the right thing,” wrote another. “Astrophysicists and NASA agree that climate change is real. And so does anybody with half a brain.”

The post may have shocked some fans of the brand, but Tiffany’s been dedicated to causes including the environment and responsible mining for decades.

In 2014 The New York Times reported that Michael J. Kowalski, who retired as Tiffany’s CEO and chairman in 2015 but was brought back as interim CEO in February 2017 after Frederic Patrick Cumenal resigned, had plans to become an environmental activist in his retirement.

In 2002, he spearheaded the decision to stop selling coral and later protested a proposed gold and copper mine that would have decimated the largest sockeye salmon run in the world in Bristol Bay, Alaska. (The company even took out full page ads to congratulate the E.P.A. on its efforts there.)

“Tiffany & Co. has always been a part of the political makeup of our country since they opened,” one Facebook commenter correctly noted. “Consumerism, women’s rights especially, globalism, responsible mining, the list goes on and on…Read their history. It is an amazing one, and keeps me loyal to the brand.”