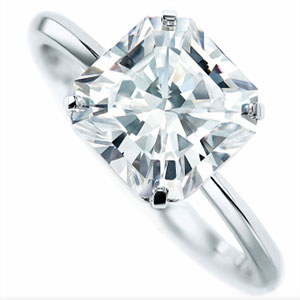 Designed by Reed Krakoff, who Tiffany named chief artistic officer in 2017, the ring is only now getting a proper marketing push—as the subject of the brand’s latest “Believe in Love” campaign, which launched globally on Monday.

Central to the campaign is a short black-and-white film that artfully captures intimate moments (things like hand-holding and hair-smoothing) between a man and a woman—and her Tiffany True ring.

The video is set to Lady Gaga’s original song “Is That Alright?” from the film A Star Is Born. Gaga has been a very visible ambassador for Tiffany in recent seasons—she wore pieces from the brand to nearly every awards show this year and took the iconic Tiffany Diamond for a spin at the Oscars.

The Tiffany True ring features a new diamond cut devised by Tiffany & Co.’s team of experts, my JCK colleague Amy Elliott reported back in September. It’s a “square mixed cut engineered for maximum brilliance,” according to the company, that “exposes more surface area on the diamond’s main facet, enhancing its luster through heightened contrast and dispersed light.”

Krakoff said at the time, “We are introducing a supreme expression of modern love.”