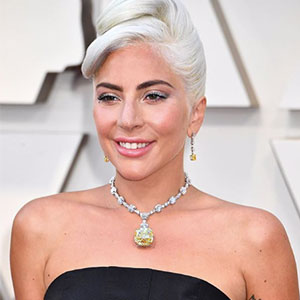 The display of brilliant jewelry at last night’s Academy Awards was breathtaking, as expected. Best Picture presenter Julia Roberts shone in Cindy Chao diamond pieces so ethereally organic-looking, they might have been plucked from an enchanted forest. Charlize Theron donned bold and classic Serpenti looks from Bulgari, while Best Supporting Actress nominee Rachel Weisz wore Cartier diamond brooches from 1903 transformed into a glam headband (more on all three, below).

But in the end, one iconic rock ruled them all. The legendary Tiffany Diamond hung around dual nominee Lady Gaga’s neck, set in a new design created specifically for the occasion. The last person to wear the dazzling 128.54 ct. yellow was Audrey Hepburn—and it’s safe to say the sight of the stone sent shivers down the backs of many gem and jewelry lovers.

Not that everyone loved Gaga’s overall jewelry look. A few in the JCK office wondered if the all-out-glam vibe was perhaps too on the nose for the Oscars. But there was no denying the diamond’s beauty—or historical significance.

Read on to find out which Oscar jewels made JCK’s editors and writers most giddy.

Is it just us, or does Julia Roberts just keep getting more beautiful? The Pretty Woman skipped the red carpet, so we had no idea what to expect when she came out to present Best Picture. And considering her usual preferred black-white-and-beige color palette, we certainly weren’t expecting a flash of hot pink—the color of the night (just ask Angela Bassett, Linda Cardellini, Gemma Chan, Helen Mirren, and Sarah Paulson). But even more eye-catching than Roberts’ custom Elie Saab gown were her jewels: spectacularly organic designs by Taiwanese artist Cindy Chao. This is by no means Chao’s first trip to the Oscars—Amy Adams wore a pair of her Asscher-cut diamond earrings in 2017—but after last night, we suspect she’ll be much more in demand. —Melissa Rose Bernardo, JCK managing editor

To describe Charlize Theron’s Oscar look in a word? Flawless. And that wasn’t just the more than 300 cts. of diamonds the Oscar winner was wearing—it was the head-to-toe perfection of an ice-blue Dior gown, a surprising brunette bob, the addition of 30 cts. of sapphires, and the unexpected twist of wearing her Bulgari Serpenti and High Jewelry necklaces over her dress. No one was wearing more bling than Theron at this year’s ceremony, and yet she still managed to look effortlessly cool—and not overdone—which is a huge credit to her stylist Leslie Fremar. This bold Bulgari statement is what dreams are made of. —Randi Molofsky, JCK jewelry director

I personally have to give it up for Spike Lee, who I felt won the jewelry Oscars hands down by sporting two knuckle rings—one that said LOVE and another that spelled out HATE—that originally appeared in his 1989 movie Do the Right Thing (worn by Bill Nunn’s character, Radio Raheem). And that huge necklace (gold, diamond, and 17 ct. opal) with the symbol that Prince once adopted as his name was crafted for the filmmaker by my friend Amedeo Scognamiglio (read about its creation here). I knew Amedeo made a cameo ring for Lee, but didn’t know about this—so it was a fun surprise. —Rima Suqi, JCK jewelry editor

I’m sure I had the same thought as everyone else who reveres jewelry history when Gaga emerged with the Tiffany Diamond radiating sunshine-like light from around her neck. You already know the stats—at 128.54 carats, the 141-year-old rock is one of the largest yellow diamonds in the world, and Gaga is only the third woman ever to wear it. (The first was Mrs. Sheldon Whitehouse for a Tiffany Ball in Newport, R.I., in 1957, and later, Audrey Hepburn for a Breakfast at Tiffany’s promotional campaign.) The necklace stunned in every lighting scenario, particularly at the piano, adding extra magic to an already-breathtaking moment. Honestly, I’m still recovering from all of it. And didn’t she wear it well in general? All the confidence, ease, and grace that wearing a Tiffany style icon requires. —Amy Elliott, All That Glitters blogger and JCK contributing writer

Rachel Weisz wore two Cartier collection platinum and diamond brooches as a hairpiece. The brooches are from 1903! The idea of repurposing brooches as a headband was so creative, and, even though she was wearing red latex by Givenchy, the look she achieved was very Old World. —Kristin Young, JCK contributor

Maya Rudolph’s dress was frilly, über-feminine, and the opposite of anything I’d ever wear, but it was bright and bubbly and made me smile, and it had a cape—a cape! Sealing the deal were those earrings by Irene Neuwirth. It was just such an eclectic, unexpected mash-up, and although I don’t expect it will be a popular choice of fashion critics, I can’t deny myself the fun. Also, a special shout-out to Jason Momoa for wearing a scrunchie on his wrist that matched his suit—my pick for random-but-functional accessory! —Brittany Siminitz, JCK contributing editor