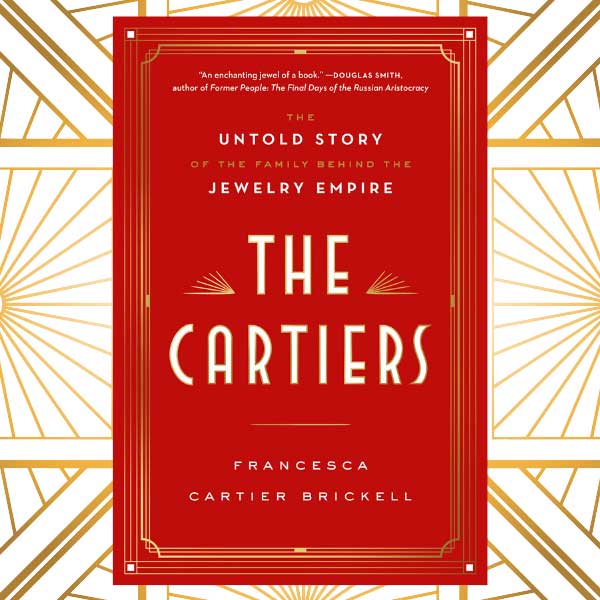 I spent my travel time back and forth from JCK Tucson reading through a new jewelry book that people in our world have been talking about: The Cartiers: The Untold Story of the Family Behind the Jewelry Empire (Ballantine Books, 2019).

It’s a fascinating read, particularly because of its author: Francesca Cartier Brickell, a sixth-generation descendant of the family, who, in 2009, discovered an old trunk in her grandfather’s cellar that was brimming with archival correspondence, renderings, sketchbooks, and other ephemera.

(Brickell is also the Luxury Keynote Breakfast speaker at this year’s Luxury by JCK.)

As a literature scholar, Brickell was compelled to embark on a  decade-long research project, one that would eventually allow her to tell this story about Cartier—its origins as a small family business in Paris and subsequent rise to acclaim during the 1920s and 1930s, when the firm’s three branches were helmed by Louis (the creative genius in Paris), Pierre (the brilliant marketer in New York, famous for acquiring and selling the Hope Diamond and a certain legendary real estate deal), and Jacques (head of Cartier London and the firm’s key operative in India, catering to the Maharajas of the day to produce some of the most legendary designs the maison ever made).

A unique feature of the book is that it includes interviews Brickell personally conducted with her grandfather, Jean-Jacques (son of Jacques, pictured above). Jean-Jacques was the head of Cartier London until the family sold the firm to Richemont in 1964.

As I read through the text, I took note of what this scholarly volume offers in the way of sales and brand-building advice.

The complexities of sustaining a family-run business are also addressed at length, which many JCK readers should find not only interesting but also profoundly relatable.

Louis Cartier famously said “Never copy, only create,” and that’s a mantra perennially relevant to any jeweler or designer working today. Beyond this gem, here are the book’s top seven takeaways for jewelry professionals.

This was a value held dear by founder Louis-François Cartier, who, in his own words, believed this to be “the easy way to keep friends whom we may need, however lowly or great their position.” Everyone was to be treated with respect. According to the author’s grandfather, Jean-Jacques, former head of Cartier London: “Every client who walked through the doors of Cartier had to enjoy the experience. We used to have a wonderful doorman who looked a bit like Santa Claus and greeted every client with this enormous smile. It was almost impossible not to smile back…people generally don’t buy jewels if they’re not feeling good.”

According to Brickell, Pierre Cartier, head of Carter New York, dressed every day as if he were going to a formal wedding. “It was his way of showing clients respect while conveying the notion that Cartier personified elegance,” she writes.

After Pierre successfully converted Manhattan’s aristocratic elite (including the Plant family, from whom he obtained the mansion—where Cartier is still located today—in exchange for a pearl necklace), he found clever ways to entice new clients into the Cartier boutique: “Bellboys of smart hotels and waiters in good restaurants were offered generous tips in exchange for information on particularly romantic couples,” writes Brickell. “Flower delivery boys and fine chocolate shop assistants were rewarded when they updated Cartier on any significant orders.”

Adapt your product offerings to the socioeconomic climate.

Cartier survived two major wars, the Great Depression, and the bleak economic hardships that came along with such events by pivoting its product development strategy. Small charms and pendants were offered in Paris during World War I. The famous Trinity ring, which debuted in 1925, was a radical move for the maison because the design had no gemstones (and remains a hit to this day) and was therefore more attainable than its high jewelry. Fine stationery was introduced at Cartier New York around the same time, a postwar move to keep clients coming in even though they did not have the means to buy jewelry. According to Brickell, Pierre hoped customers would feel a sense of loyalty to the jeweler in a few years when they landed on their feet, made more money, or married well.

Have jewels in your pocket, ready to show at all times.

In a section of the book devoted to one of Cartier’s most devoted lifelong clients, Barbara Hutton, the heiress herself is quoted in reference to one of Cartier’s leading salesmen in New York, Jules Glaenzer. Hutton liked his “habit of carrying jewels round in his pockets…no security guards, no fancy jewelry cases. He would come round and turn his pockets out on a coffee table or bed.”

Cartier had seasonal branches on the French Riviera in the late 1930s, and there’s a great anecdote about an American salesmen, Jack Hasey, who was tasked with recruiting VIP clients on holiday in the area. His methods were unconventional but effective: On one occasion, when he “heard about a party on the yacht of a millionaire steelmaker, he simply dived from a pier in his bathing suit, swam to the yacht, joined the party, and made some friends,” writes Brickell. A few days later, Hasey’s new acquaintances would turn up at the store and ask to deal with him personally.

As per Jean-Jacques: “My father always insisted on using the highest-quality gemstones. He and his brothers operated on the belief that though the resulting piece might be expensive, if it was of good quality and lasted for generations, then the high price was soon forgotten. It was worth focusing on the best.”

Top: The Cartiers: The Untold Story of the Family Behind the Jewelry Empire was published by Ballantine Books in November 2019. Its author Francesca Cartier Brickell is a sixth-generation descendant of the family and regularly gives talks and lectures on the book —including the Keynote Breakfast presentation at Luxury by JCK on May 31, 2020, held in the Palazzo Ballroom, Level 5, from 7:30-9:30 a.m. Follow @creatingcartier for updates.