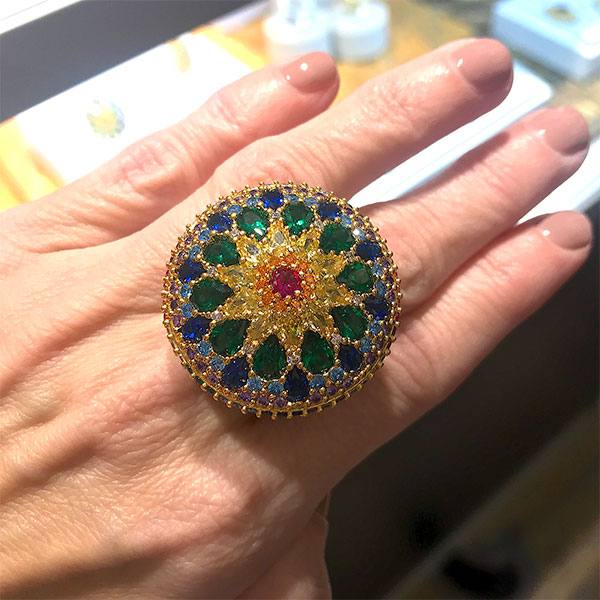 You have until Sunday afternoon to check out the gem and jewelry action at JCK Tucson. Two days in, we can report that there’s plenty to see, especially if your clients love color. Here’s a preview plus trend report to help streamline your treasure hunt.

First, we’ve been tracking a general trend toward garnets—not the usual dark reds but the more exotic orange spessartites and rosy-peach malaya varieties—since well before the show. We spotted an abundance of them, the bracelet below being a particularly resplendent example. It also points to a palette we’re seeing, one that recalls the varied pink-peach-orange hues of a sunset.

Also on the topic of color: We saw plenty of hat tips to Pantone’s Classic Blue in the form of sapphires, lapis, the darker shades of boulder opal, and kyanite.

Greens—chrysoprase, emerald, tsavorite, the seafoamy variety of aquamarine, mint tourmaline, and blue-green paraibas—are next in line for the most well-represented hue on the floor.

Convertible styles, especially necklaces that can be worn doubled, tripled, or twisted to create looks in a variety of lengths, had prominence. Built-in versatility gives the consumer more bang for her buck, a motivator no matter her budget.

At Aaron Henry, the shank of a tanzanite ring was open on the sides so that a band of sapphires, rubies, or diamonds could be popped in to fill the negative space.

Italian jeweler Nanis had a ring that can be worn four ways: The center flips from a ruby to pavé black and white diamonds, and the shank pushes up to transform the piece into a pendant. Four looks in one. Divine.

And Steven Anton Rehage has candy agate necklaces in resort colors that can be worn as a statement as shown below, or long and swingy as a “neckmess” foundation, or in other combinations for a more casual look.

A general trend to consider for spring? Men’s jewelry being recast as gender-neutral or collections that were specifically created to feel non-cis. Including some with pearls.

Top: Florida-based designer Sergio Andrés Mendoza of Pharaoun Cocktail Rings won the JCK Tucson 2020 Jewelry Award in the design category for his Core Chakra Mandala ring. Get this—it’s all CZ and retails for just $595. Stealth luxury at its best.