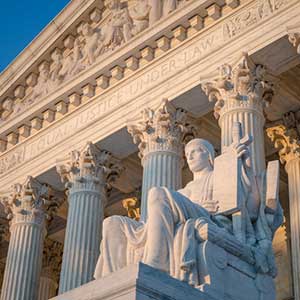 On Monday, the U.S. Supreme Court declined to hear Sterling Jewelers’ appeal of a court ruling that will allow 70,000 female employees to participate in a massive class-action arbitration that alleges that the company systematically discriminated against them.

The court case dates back to 2008, when a group of 14 female Sterling employees filed a gender-discrimination complaint in New York federal court. The suit, which sought class-action status, claimed that female employees were paid less than their male counterparts because of certain company policies, including a “tap on the shoulder” promotion system.

The court sent to the case to arbitration, as mandated by the company’s RESOLVE (internal dispute-resolution) program.

In 2009, arbitrator Kathleen Roberts ruled that Sterling’s RESOLVE agreement permitted class-action suits. She eventually certified a class that could include as many as 70,000 women—which would constitute the largest class-action arbitration in history.

Sterling disputed that RESOLVE allowed class actions, as they weren’t mentioned in the original agreement. It appealed the arbitrator’s decision in 2010, setting off a battle that has lasted a decade.

In 2018, a New York judge ruled the arbitrator had exceeded her authority and limited to the class to just 250 litigants who had opted in to the class action. The plaintiffs appealed to the Second Circuit Court of Appeals.

Yet six months later, the Second Circuit Court of Appeals ruled against Sterling and overturned the district court’s ruling, while noting this was the “fourth time this case has come before this Court.”

In its unanimous decision, the court of appeals differentiated between the Sterling and Lamps Plus cases, as the Lamps Plus agreement said that a court, not an arbitrator, would settle the class-action question.

“By signing the RESOLVE Agreement,” wrote Circuit Judge Peter Hall, “[employees] consented to the arbitrator’s authority to decide the threshold question of whether the agreement permits class arbitration.”

Sterling then filed a motion for an en banc panel to rehear the case—which was denied—before turning to the U.S. Supreme Court. The Supreme Court’s decision likely means that Sterling has reached the end of the line on this particular question.

It is now possible that, after 12 years, arbitrator Roberts may finally get to rule on the underlying question of whether Sterling’s policies permitted gender discrimination. The size of the class means that the arbitration could prove potentially costly to the company, which has already sustained considerable PR damage from this saga. While allegations of sexual harassment have arisen in the class action—and have comprised a lion’s share of the press coverage of this case—they are not part of the class-action litigation, which is largely focused on the question of pay equity.

Plaintiff attorney Joseph Sellars did not return a request for comment by the time of publication.

A statement from Signet said, “We believe the claims in this matter are without merit and are not substantiated by the relevant facts and statistics. We will continue to vigorously defend against these claims, which do not accurately reflect our company or our culture. Indeed, we have long been committed to fostering a culture of respect, integrity, diversity, and inclusion where all employees feel safe, supported, and empowered—this is a tenet of who we are.”

It noted that “Signet is a recognized leader among companies for gender diversity, with women filling 74% of store management positions and gender parity in both the C-Suite and Board of Directors. Under the leadership of our CEO, Gina Drosos, we continue to champion diversity and inclusion as a strategic priority, as we have been honored to be included on the Bloomberg Gender Equality Index for two consecutive years.”