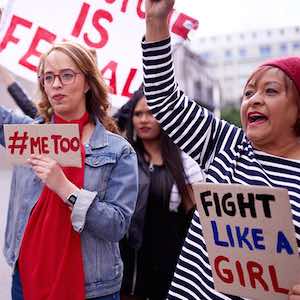 Last week, Signet Jewelers was hit by a damaging new article about past alleged sexual harassment at its Sterling division, which has traditionally overseen Kay and Jared.

The piece, by Taffy Brodesser-Akner, made the cover of The New York Times Magazine and was well-written and impassioned—and featured some stories that were truly sickening.

I’ve met many people from Signet. They are generally decent and serious. I know company vets—mostly in corporate—who genuinely loved working there and are justifiably proud of what they built. I’ve also known people, mostly in the stores, who didn’t like it and felt pressured and micromanaged. A big company obviously encompasses a wide range of experiences.

Just because Signet feels the story was not fair, it doesn’t mean it wasn’t accurate. It would take a huge leap of faith to disbelieve all the stories or to think that 249 sworn affidavits are untrue. Like Brodesser-Akner, I perused the statements made public in the class action. Unlike her, I could read only about 10 of them before I couldn’t take it any longer.

Signet has noted that these allegations have been covered in the media before, including by The New York Times. It’s called the allegations “old,” noting some date back to the 1990s. Even if true, this comes across as an abdication of responsibility. Some of the allegations against Bill Cosby and Harvey Weinstein are just as old, even older. And, as Michelle Graff pointed out, some of the workers still feel the effects of these incidents.

I wrote two years ago that, at the same time the Signet affidavits were made public, car-sharing service Uber weathered its own harassment scandal. But Uber handled things differently. It was arguably on shakier ground. The charges were more recent. Its CEO had a history of sexist comments. It glorified rule-breaking.

Holder’s report was posted publicly. (So was a similar report done for Airbnb.) Jones’ wasn’t. Signet hasn’t mentioned what she found.

Uber’s travails were also recently detailed in a respected publication. However, last month’s New Yorker article on Uber was built around an interview of new CEO Dara Khosrowshahi, who invited the reporter to his weekend home. She ate dinner with his kids. She met his wife.

Granted, Uber has more cultural cachet than a Midwest-based, mid-market jewelry chain. But Khosrowshahi was also candid about Uber’s troubled past. Before he joined, he thought the company was “completely effed up,” he said. “I was amazed at how one bad thing could come to light after another.” After he became CEO, he wrote that Uber’s culture “needs to evolve.” In particular, “toe-stepping”—its emphasis on workplace competition, even if meant nudging aside colleagues—“too often…was used as an excuse for being an a–hole.”

Signet CEO Gina Drosos has not exactly shied away from discussing her company’s past issues. But she hasn’t said much about this, other than to repeatedly note how the company has been recognized for its diversity. She didn’t talk to Brodesser-Akner. Perhaps that’s because the issue is still in the courts.

The ongoing arbitration is a huge part of the problem; in fact, it is likely the problem. One reason Signet is always publicly re-litigating these issues is because it is still actually litigating them. Jock v. Sterling, the class-action arbitration on pay disparity that first brought the harassment allegations to light, is still in court after 11 years. Even if Signet did express sympathy for the women, it might come across as hypocritical, considering it’s fighting them in court. “If you have a lawsuit that’s outstanding that deals with your history, then you still do have these problems,” Brodesser-Akner told Katie Couric.

This 11-year wait is, to use a word Signet has used lately, unfair—especially to the claimants, who, let’s not forget, were former Signet employees griping about a pay disparity generally acknowledged to exist (the dispute is over its cause). Some of the affidavits are pretty horrifying. “Women have died waiting for this case to be heard,” Washington Post writer Drew Harwell, who first covered the allegations, recently wrote on Twitter.

Signet has long argued that the harassment allegations aren’t part of the class action. But that doesn’t mean they are false. And when people read them, that distinction makes little difference.

Theoretically, arbitrations should speed up the process. Here, several of the arbitrator’s rulings were challenged in federal court. That defeats the purpose of alternative dispute resolution. And while Signet has won some victories, this long drawn-out case has cost it dearly.

The company’s counsel blamed the plaintiffs for the delay: “For more than 10 years, attorneys for the 14 Jock claimants have delayed resolution for their clients. They prolonged the case and increased their legal fees by asserting class action claims and trying to include thousands of women in arbitration without their consent or knowledge.”

Others, however, have accused Signet of dragging things out. The Times Magazine quotes a former Equal Employment Opportunity Commission official as saying one reason the agency settled with Signet is because it wanted the issue off of its plate.

Last week, just after the Times story was posted online, the U.S. Supreme Court ruled that class-action arbitrations are not permitted in instances when the employment agreement didn’t explicitly allow them. (That was an issue in this case.) Shortly afterward, Signet’s lawyers asked the appeals court to vacate the class award. It seems close to winning this part of the case.

Signet’s counsel tells JCK: “Once the presiding court in the Jock case decides the class question…, which we trust will be soon, we look forward to proceeding to address each claim.”

I hope it does address them, fairly and quickly. If those women walk away with little or nothing, it might be a legal victory, but a loss from both a moral and PR perspective.

Signet needs to make amends. It needs to take responsibility for things that almost surely happened. Admitting that some bad events took place doesn’t mean it was, or is, a bad company. Copping to mistakes is the hallmark of an ethical business.

There is no painless way to handle these issues. The world doesn’t issue “get out of a scandal free” cards. There is now great skepticism toward public apologies. Still, in this age of social media, brands have to utter them more frequently. They might as well get them right.

People don’t expect companies to be perfect. But when they make mistakes—even if they are old mistakes—they are expected to take responsibility, make amends, and spell out how things will be different from now on. By protesting its innocence so vociferously, Signet has only made itself look worse.

If I didn’t know people at Signet, and I read that story, I might also think it was a terrible company. (One person here said reading about the reported events made her physically sick.) However, I do know people there. I know it has people who are capable of responding to these allegations in a forthright, caring way. They need to show that side of the company—rather than the past ugly side that resurfaced last week.