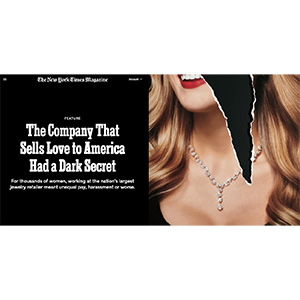 A New York Times Magazine cover story on Signet Jewelers, which appeared online this morning, paints a harsh picture of a company that long allowed a toxic culture of gender discrimination and sexual harassment to flourish in its Sterling division.

In her nearly-12,000-word piece, “The Company That Sells Love to America Had a Dark Secret,” staff writer Taffy Brodesser-Akner spoke to dozens of female former Sterling employees who detailed incidents of being repeatedly passed over for a promotion or raise despite their stellar sales records, while seeing their male colleagues move swiftly up the pay and promotion ladders.

She also talked with several former employees—some of whom have joined a long-running discrimination class action against the company—who testified to incidents of on-the-job harassment, ranging from inappropriate comments (“You just ran into me with your boobs!” one manager allegedly said to a female employee) to sexual coercion (a store manager allegedly traded sex for a location transfer).

While some of these allegations have been reported before, by The Washington Post, The New York Times, and JCK, the Times Magazine article was particularly detailed and searing and included one account of rape.

Signet, in a statement sent to JCK this morning, says, “We’re disappointed that The New York Times decided to publish an article primarily based on decades-old allegations, and we believe casts our company unfairly. Signet is a recognized leader among companies for gender diversity, with women making up 74 percent of store management positions and full gender parity in both the C-Suite and board of directors. Under the leadership of our CEO Gina Drosos, we are undeterred in our ongoing mission to champion diversity and inclusion as a strategic priority and in our multi-year business transformation plan.”

For the last decade Sterling has been fighting a class-action arbitration that claims it systemically discriminated against female employees (which it denies). It has repeatedly stressed that the harassment allegations are not being litigated in the class action, although some have appeared in affidavits submitted in the case.

While mandatory arbitration clauses are intended to settle claims quickly, the Sterling discrimination arbitration has dragged on for a decade, as the parties have wrangled over its scope and composition of the class. Last year, a federal judge barred 70,000 women from participating in it. Plaintiff lawyers have appealed that ruling.

“After all these years, the case has progressed only up to the part that determines how many women are part of it,” Brodesser-Akner writes.

She clearly feels the claims have merit. Her article recounts several instances where women said they were passed over for promotions despite their qualifications and lied to about how much their fellow male sales associates made—which was almost always more. Employees told her that Sterling’s district and regional managers fostered a boys’-club environment where sentiments such as “hire women because we can pay them less” passed for management suggestions.

Past company meetings and excursions were infamous for their furtive hookups, and many women said they were openly propositioned and even sexually molested at them, she writes.

One such instance: “There was Diane Acampora, in Lancaster, Pa., who said that after five years at Kay and six years of experience at another store she made $2 to $4 less per hour than her more-recently-hired, less-experienced male colleagues,” Brodesser-Akner writes. “When she was promoted to manager, she attended the company’s annual managers’ meeting in Florida. On a shuttle bus back to the resort, she was pulled onto the lap of a manager, who held her tightly as he fondled her. At the same meeting, a district manager tried to kiss her. At a later meeting, she had to leave a hot tub because discussion turned uncomfortably sexual. She was later told that the hot-tub scene turned into an orgy.”

The article also charges that employees were sometimes retaliated against when they reported incidents to Sterling’s in-house complaint system.

In 2017, Gina Drosos became Signet’s first female CEO and made a priority of stressing gender diversity at the company. In January, Signet was included in the 2019 Bloomberg Gender-Equality Index, which bills itself as the “world’s only comprehensive ranking on gender equality.”

Drosos refused to meet with Brodesser-Akner during the two-year period she was reporting the story, according to the writer.

“She may agree with the company’s spokesman that these accusations are old,”  Brodesser-Akner writes. “While you can make a woman your chief executive and fill your board of directors with them, you still have to reckon with the past. That’s the nature of secrets. When they are found out, you have to deal with them.”

The Times Magazine article is another piece of bad news for a company that hasn’t had much to be happy about lately. Last week, in a cost-cutting move, it laid off employees at its Dallas and Akron, Ohio, home offices. (Additional reporting by Rob Bates)