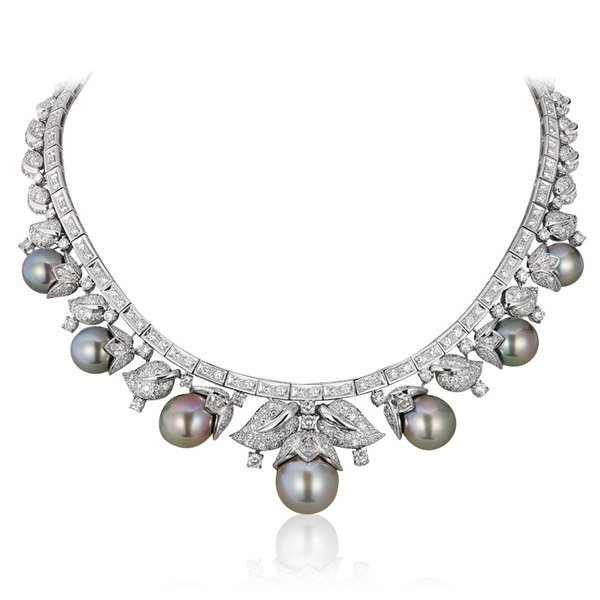 I’m not quite willing to give my glimmering gold disc pendant the boot (it’s sentimentally special, and its everyday practicality can’t be beat), but if recent red carpet events are any indication, my signature piece of jewelry may need to make some room.

Statement necklaces, which dominated every retailer’s accessories line about five years ago, are back. How back are they? That they accounted for a notable majority of celebrity jewelry roundups from the last series of events—the Golden Globes, SAG Awards, and Grammys were rife with chokers, collars, and bibs—is telling.

Is red carpet jewelry a valid indicator of current or predictable market trends? I think the answer is yes—ish. Because celebrities are often decked out in jewelry many of us civilians could never afford, some styles are simply aspirational: They’re a dream to look at, garnering a “wow, that’s nice!” but don’t amount to much more, simply because they’re not accessible enough. But that’s for your high-carat jewels, for the most part, the styles that would veer far too costume for the fine jewelry connoisseur to consider re-creating or imitating on a budget. We’re not looking to mimic an exact piece, so much as embody its essence.

Remember when Jennifer Lawrence had us all draping long chains and pendants down our backs? Or when Emma Watson inspired our mismatched earring phase—one stud, one long drop? (That’s another style making its rounds again, by the way.) Watson also most notably (that I can remember, anyway), trumpeted Dior’s Mise en Dior reverse pearl earring, which inspired countless variations.

I think that the 2019 red carpet’s gripping style is the statement necklace. There’s a lot of wiggle room here—it’s not terribly specific—but it’s basically the opposite of my supersubtle but lovely Catbird Sweet Nothing choker necklace, which glimmers beautifully in the light but won’t grab your attention on the street. As temporary as the swap from minimalism to maximalism may be (don’t go retiring those sweet subtle chains), the jump between the two has its range.

While a number of notable, individual creations had us buzzing—Lady Gaga sported the trifecta with an (arguably bib-ish) custom Tiffany at the Golden Globes, another Tiffany collar creation at the Grammys, and an amazing Tiffany choker necklace at the SAG Awards (I’m starting to think Gaga and Tiffany are solely responsible for this current necklace craze)—just the fact that there were so many necklaces to be seen tips the scales in favor of a necklace renaissance (a neck-aissance?).

I’m not sure that I foresee quite the influx of costume statement necklaces to hit the fast fashion circuit like they did a number of years ago (you know a jewelry trend—not just a jump in demand but a full-blown fad—has hit the fan when places like Forever 21 are shilling their base metal and plastic versions to the mass market). But I do think that for fine jewelers, visually arresting, stand-alone pieces that don’t fall into the “layerable” category that we have been betting on heavily (and still absolutely should) are worthy of their room in the showcase.

It just so happens that a number of wonderful brands and designers have some to offer. Here is just a small sampling, featuring a range of materials and budgets. I’ll be interested to see if necklaces are still the reigning jewel at this weekend’s Academy Awards.