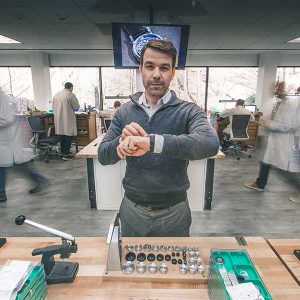 Last week, I caught up with Hamilton Powell, founder and CEO of Crown & Caliber, one of the more successful e-tailers in the increasingly popular pre-owned watch space. He’d just returned from Baselworld, where he met with American brick-and-mortar retailers to discuss the watch trade-in program his company has created for stores interested in accepting secondhand watches from their customers, but ill-equipped to run the programs themselves.

“A lot of the big retailers are in one city at one time,” Powell said. “It makes it easy to have meetings. Plus, we feel it’s important to maintain relationships with the brands. They’re beginning to realize what happens with pre-owned affects the new market. I can foresee that’ll become a more important part of our business longer term.”

According to Powell, Crown & Caliber is going gangbusters. “My business doubled in 2017, doubled again in 2018, and will likely again double in 2019,” he said. “We have 57 full-time employees in our Atlanta office.”

He cites people’s growing comfort with both e-commerce and pre-owned watches as factors in Crown & Caliber’s success. He also credits his “very simple” business model: “People go on our site, tell us what they have, we get their watch, and [once we’ve vetted it] we flat-out buy it. We now own 4,000 watches in-house. We just celebrated our 50,000th transaction a couple months ago. So business has grown quite a bit.”

During our phone interview, edited and condensed below, Powell shared the details of Crown & Caliber’s trade-in program, which he intends to implement with independent retailers by year’s end. He also spoke about the shifting perceptions of the pre-owned watch business, how it differs from the pre-owned car trade, and why he’s breathing a sigh of relief about Breitling.

What were your impressions of Baselworld?

My impressions are probably not dissimilar from other people’s. It was slow. It was a bit different without the Omega booth and kind of a breath of fresh air. The show wasn’t as crowded, which was nice. The chatter and murmurs were all about, what’s going to happen? What does this all mean? That’s what monopolized the conversation. It was kind of a mediocre year in terms of new releases, which magnified the conversation about the industry.

One of the things watchmakers and retailers are talking about is how to handle the pre-owned business. Tell us a bit about how Crown & Caliber does it. For instance, how do your sales break down between vintage and contemporary models?

There are two types of “used watches”: vintage and what we call “pre-owned.” Vintage—those are really cool watches. Paul Newman Rolexes! So cool but very difficult to build a scalable business model around them. We’ll have 100-plus watches coming through the shop doing repair and servicing. But if you get a vintage Heuer Monaco that needs an original hand from 1972—that would crush my otherwise scalable process; it’s like putting a stick in the spokes of the wheel.

So we have decidedly said “no” to vintage. When we get vintage in, we’ll work with a trusted third-party dealer, or we’ll be up front with the customer. We’re working with 95 percent of what’s out there: “modern pre-owned,” roughly watches that are 1980 and newer. And we see a lot. In Basel, I’m basically seeing watches that will end up in my office in the next six months. Last year, when Rolex introduced the “root beer bezel,” four to five months later they got released at retail and weeks later they started coming in here because people got gifted and didn’t want them.

What’s your retail trade-in program all about?

We’ve built an extremely complicated, sophisticated database that will confidently allow our team to make offers to customers. We have the ability to help sellers all day, every day. A lot of retailers in the watch and jewelry space were missing opportunities when a customer came into their stores with a watch they wanted to trade in and were being denied. We found we could be their outsource partner. One of our retailers is Birks in Canada. Go to their watch trade-in program, you’ll see how they partner with Crown & Caliber. You’ll see a button: “Get a quote now.” That form is our quote form, hosted by Crown & Caliber. So when you enter it there, it’s just like you’re entering on our site.

Normally, on our site, let’s say we’d make you a $4,000 cash offer. But if you came through Birks, we’d give you a cash offer and also a second offer: a $4,800 store credit (20 percent higher than the cash offer). Once the customer makes a choice, they receive a shipping label. Once we verify the watch is authentic, which we normally do, we send that $4,000 to Birks. Birks sends a $4,800 gift card to the customer. We got a watch. The customer got 20 percent more for the watch. And Birks just got a customer with $4,800 to spend.

What we’ve seen is that the customer isn’t spending $4,800; they’re spending 2.84 times that—almost $12,000 when they go and spend that gift card, because they’re trading up, trading in a Rolex for a Patek or a Rolex for jewelry. It’s a great lead generator and foot-traffic technique and a way for customers to buy things. We’re now powering trade-in programs for the Birks Group in Canada, Jared stores, Little Switzerland, London Jewelers. And we’re about to launch a few other big ones. We believe through our technology and data, we can arm the country’s most reputable retailers with the most powerful sales tool in the watch trade.

One question I’ve heard about pre-owned “re-commerce” sites like Crown & Caliber is: Why aren’t brands running this business by themselves? Why let sites like yours take a bite out of their potential sales?

I really don’t know. If you were to tell me three years ago that brands would be involved in the pre-owned space, I’d have said you’re crazy. Last summer, Richemont purchased WatchFinder, a site that is 100 percent pre-owned and did $120 million in business last year. That said a lot. That a major group, Richemont, would want to be involved in the pre-owned space. Why? There’s a lot that happens in the pre-owned space that can help the brands. If done properly, it can preserve the integrity of the brands in the secondary market. The greater influence that Cartier [for example] can have on product in the secondary market, the greater influence they can have on their customer’s experience of the brand and on pricing in the primary market.

One of our priorities is to make sure we are very clear our objective is both those things. We are being ambassadors to those brands. Preserving their integrity by hiring good watchmakers and providing good customer experiences, as opposed to some of the shadier dealers.

In the car space, there’s a model of certified pre-owned, certified by brands themselves. That’s a model. But then you have the CarMaxes that operate outside that model. Multiple models can exist. It will be interesting to see where the brands end up. The only data point we have is what happened last summer with Richemont deciding to acquire WatchFinder.

But it also shows how hard it is to [run a pre-owned business]. Because it’s one thing to say the brands can just do this. To create, produce, and sell a watch takes a huge amount of work and skill. But to reverse engineer that, to take back a watch and do all that in reverse order is a very challenging thing, and that’s essentially what we’ve been able to do. I’d also say: There’s a difference between selling pre-owned and trade-in. The model brands are considering is certified pre-owned. How much of that will be pre-owned versus last year’s stock? Selling pre-owned versus actually having a trade-in program—to have a brand run the latter means they need to be able to take in another brand’s watch and then sell that, and that they’re able to authenticate it.

We always hear these comparisons to the car trade, but how are watches different?

Watches have a sentimental nature that cars often don’t. Cars are more of an asset than watches. We have to recognize what we’re dealing with here. It’s a memory, an experience, it’s a gift. It’s not an asset. Whereas most cars are something that gets you from point A to point B. That’s a key differentiator. Another key differentiator is data, historically. There’s been much greater data in the car industry. There are no VIN numbers in the watch industry. One of the things that’s been lacking in the watch space. Can you imagine selling your car and there’s no such thing as a VIN number? And the only way you could search for a car would be pricing at the model level. Plus, the watch industry has historically been behind in the digital space. That means trust of the online watch trade is lagging. That’s hopefully where we’ve helped. That’s a big difference: Digital sophistication is lacking.

Finally, did you notice any interesting trends in Basel?

I know my limits. There’s always a greater watch nerd. That Yachtmaster was pretty cool. On the independent side of things, the Accutron from Bulova will be interesting to see if it starts to inspire some more loyalty. I loved the two-tone Sea-Dweller—we will absolutely see that do well. Breitling crushed it. Georges Kern is killing it.

Let me tell you why: He is listening to the collector community. I would love to see his schedule. I’d bet he still has an old-school leather-bound one, and it’s filled with appointments with some of the world’s best collectors. That Navitimer 806 1959 reissue. I tip my hat to Tudor, Rolex, and Patek, but I think Breitling did such a great job, the result of lots of discussions with the collector community. The thing that’s exciting about Breitling is with Kern, they’ve found their identity. You’ve got this wonderful history, but then you’ve got Bentleys and bling and 44 mm days. What’s the identity here? Kern has brought it back. Now we can breathe a sigh of relief.