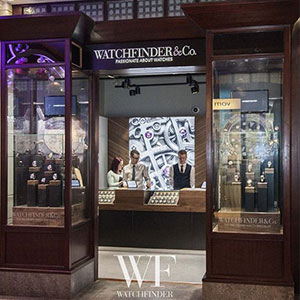 Swiss luxury goods company Richemont has reached an agreement to acquire all the share capital of  Watchfinder, a British retailer and website that sells preowned watches.

Terms were not disclosed, but it was a described as “a private transaction with [Watchfinder’s] shareholders.” The transaction is expected to close this summer.

Established in 2002 in the United Kingdom by cofounder Stuart Hennell, Watchfinder sells preowned watches online and through seven boutiques. It has about 200 employees worldwide.

The acquisition is a still-unusual example of a leading luxury watchmaker not only embracing the secondhand timepiece market, but in this case, actually having a stake in it. The move follows in the footsteps of another Swiss watchmaker, Audemars Piguet, which in January announced it would launch a secondhand watch business, which it will test in its stores this year.

In a statement, Richemont chairman Johann Rupert said that along with Richemont’s recently completed acquisition of Yoox Net-a-Porter, and its recently increased stake in duty-free travel retailer Dufry, this new acquisition will allow the conglomerate to “better serve the sophisticated needs of a discerning clientele.

“Sixteen years ago, Watchfinder’s founders foresaw the need for an online marketplace for premium preowned timepieces,” Rupert was quoted as saying in the statement. “Watch enthusiasts themselves, they established Watchfinder to provide excellence in customer experience.

“We believe there are substantial opportunities to help grow the company further,” he added. “Today, Watchfinder operates both as an ‘online’ and ‘offline’ business in a complementary, growing, and still relatively unstructured segment of the industry.”

The Watchfinder transaction is not expected to have any effect on Richemont’s financial results for the year.