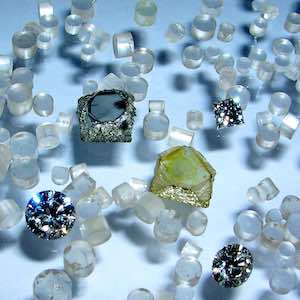 The assets of Scio Diamond, a Greenville, S.C.–based producer of lab-grown diamonds, have been purchased by Nevada’s Adamas One Corp., according to a Dec. 11 filing with the Securities and Exchange Commission (SEC).

The purchase agreement calls for the satisfaction of Scio’s $3.3 million in secured debt in the 18 months following the deal’s closing; the issuance of 350,000 shares of common stock, with a guarantee minimum resale price of $2 per share, to settle Scio’s $3 million in unsecured debt; and issuance of 900,000 shares of Adamas stock to be distributed to Scio’s current shareholders.

The sale is subject to shareholder approval, as well as Adamas One filing a registration statement with the SEC.

The SEC filing announcing the sale was signed by Scio CEO Gerald McGuire, who did not respond to an email request for comment.

Scio Diamond was originally Apollo Diamond, one of the first companies to commercially market lab-grown diamonds. Apollo first came on the scene in the 1990s. It went public in 2011, and soon found itself enmeshed in a series of lawsuits and proxy battles with a group of disgruntled shareholders, who eventually took over the board of directors. In 2017, its former chairman Edward S. Adams was charged with tax fraud. That case is ongoing.

Scio has not filed any public notices since February, and JCK was unable to find any current information on the company earlier this year.

The only Adamas One Corp. listed by the Nevada Secretary of State was registered on Sept. 30. It lists as its sole officer John G. Grdina of Scottsdale, Ariz.

Anthony DeMint, an attorney for DeMint Law, the Nevada law firm that is acting as registered agent for Adamas, declined comment, adding “due to the nature of this transaction, all information will be filed with the SEC when available.”