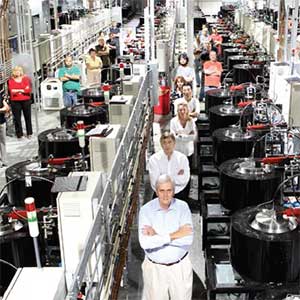 If lab-grown diamonds are enjoying more industry acceptance, that’s in part because of the two companies that pioneered the concept: Apollo Diamond and Gemesis.

Today, both companies operate under different names—Apollo is now Scio, and Gemesis is called Pure Grown Diamonds (PGD). Two of the driving forces between Apollo and Gemesis—Robert Linares and Carter Clarke, respectively—are no longer with those companies. Yet just as the companies’ long-sought goal of market acceptance of lab-grown diamonds appears to be coming true, they face very different issues.

Scio has gone virtually silent. Even though it’s a public company, it hasn’t filed a notice with the Securities and Exchange Commission since February of this year, when it announced that it couldn’t provide its latest financial report. In fact, it hasn’t provided any financials since February 2017, when it noted “the company has generated little revenue to date,” which, along with other factors, “raise[s] substantial doubt about the company’s ability to continue as a going concern.” At press time its stock was trading for about a penny.

JCK was unable to reach the company for an update. Its main number goes to an answering machine, and emails to its CEO, chief financial officer, and an address for inquiries have gone unreturned. Its site is still operating but includes seemingly out-of-date info: JCK reached out to someone listed as a board member, and that person replied he is no longer with the company.

On the other hand, Pure Grown Diamonds (PGD)—the former Gemesis—seems to be thriving. Its site lists dozens of retailers stocking its product. It recently moved its offices from New Jersey to a “new state-of-the-art sales and distribution center” in New York City. The move “will start a new chapter for Pure Grown Diamonds and we look forward to many years of growth in our business,” said Pure Grown director Suraj Mehta in a statement. Suraj Mehta also appeared on a forum at JCK Las Vegas on lab-grown diamonds in June.

That same month, according to the Indian press and court records, India’s Central Bureau of Investigation (CBI) filed a charge sheet against Suraj’s father, Jatin Mehta. The former chairman of Winsome Diamonds was charged with alleged violations of India’s Prevention of Corruption Act, reportedly related to Winsome’s default on a number of bank loans. (Jatin Mehta did not return a request for comment, but in the past has proclaimed his innocence, arguing he was the victim of companies that defaulted on him.) Pure Grown has said that Jatin Mehta has no connection or ownership interests in the company.

The Indian Express subsequently reported that, in conjunction with the case, the CBI had also brought charges against Suraj Mehta and Sonia Mehta. Sonia Mehta is Jatin’s wife and is one of the owners of Pure Grown, according to a 2017 letter from the company.

So far, the Mehtas have not appeared in court in conjunction with the case, according to court records. Jatin and Sonia Mehta are now residents of St. Kitts, which has no extradition treaty with India.

“With respect to any charges against me arising out of alleged losses suffered by Indian banks dealing with companies my father was associated with, I vigorously deny any and all such charges that are made,” he says. “I can confidently say that if any such documents are ever presented to me, I will vigorously oppose them as they would be without merit. I have had no association with any Indian company whatsoever.

“Pure Grown Diamonds and I operate completely independent of my father and his businesses,” he continued. “[T]he company continues to grow in its role as the leading industry brand for the production and sale of lab-grown diamonds…We remain laser focused on our upcoming holiday initiatives and strategic goals.”

Until now the battle has been fought in IIa’s home base of Singapore. But on Sept. 7, De Beers–owned E6 filed a motion in New York federal court to compel discovery from Pure Grown. The motion seeks to learn how PGD obtained two specific diamonds, which E6 alleges infringe on its patents. (One was purchased from predecessor company Gemesis, the motion says.) According to the motion and a judgment from a Singapore court, IIa has “denied knowledge” of the stones’ provenance. E6 now seeks to subpoena Pure Grown.

In a letter filed in response, Pure Grown’s attorney called the proposed subpoena “incredibly overbroad and unduly burdensome for a non-party to the underlying litigation,” further labeling it “an extensive fishing expedition into PGD’s business, despite the fact that Element Six has failed to provide any legitimate reason why PGD’s business would even be relevant to a patent infringement action against an entirely different entity.”

IIa Technologies has staunchly denied any infringement, saying it has “developed its processes and products in-house” and intends to challenge the validity of Element Six’s patents.