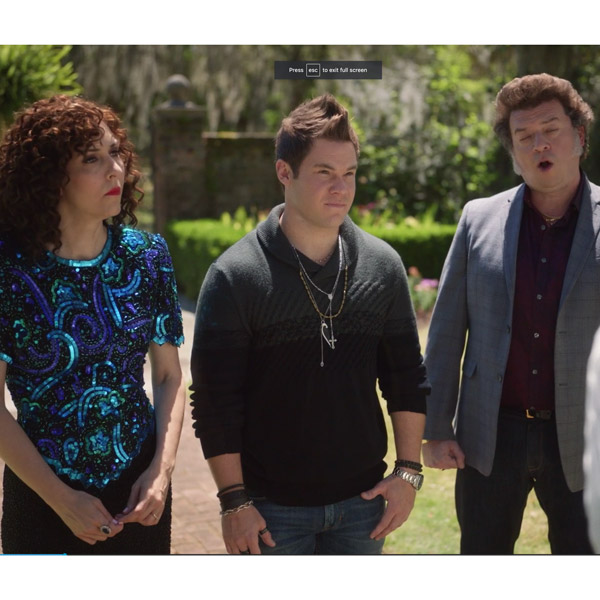 A few weeks ago I wrote about the noteworthy jewelry seen on HBO’s The Righteous Gemstones, a dark comedy about a family empire built on the business of an evangelical megachurch. My only regret in writing the article was that I didn’t have more information to share about that jewelry. Well, now I do.

Score another point for Instagram, because where else but on social media can a regular person like me easily reach out to someone working in Hollywood and actually receive an answer?

That someone on this occasion is costume designer Sarah Trost. Trost is responsible for the characters’ looks on the show, down to the last glorious, layered necklace. My questions, as someone who had not a single clue how a costume designer would acquire such pieces seen on-screen, had more to do with who designed the jewelry. It seemed logical, given what we see on a show like The Bachelorette, whose star is often outfitted with plenty of brands and designers we happen to know. In this case, the origins of each piece weren’t quite what I expected—but nevertheless, very interesting.

“Honestly, his pieces are kind of a hodgepodge,” says Trost of Adam Devine’s character on the show, the one I found to rock the most interesting jewelry (he tends to wear a lot of it). “The majority of his necklaces and bracelets come from Skingraft [a Los Angeles brand self-described as “new American avant-garde”] or Saks Off Fifth—and some of them are women’s, ha.” My favorite piece worn by Devine was that dangling charm necklace I referenced in the prior article. Turns out, it isn’t even a necklace. “It’s actually a men’s bracelet, from Oobe Brand in Charleston.”

One of the most interesting bits of info pertains to that necklace I thought to be the most spectacular (albeit still relatively demure) on the show: a necklace worn by Amber Gemstone, played by actress Cassidy Freeman (above). “We got it downtown—one of those gemstone knockoff places in Santee Alley, high-quality fakes!” says Trost. (Santee Alley is an outdoor flea market/strip mall in downtown Los Angeles.) “They are pear-shape peach/champagne ‘diamonds.’ I find the fakes are more passable when they’re a bit more subtle.” Passable indeed—it definitely fooled me.

So, there you have it, the magic of television. Where nothing is quite as it seems, and every diamond appears to be real.

Thanks again to Sarah Trost for answering my questions. You can watch this gem of a show, which was renewed for a second season, on HBO.