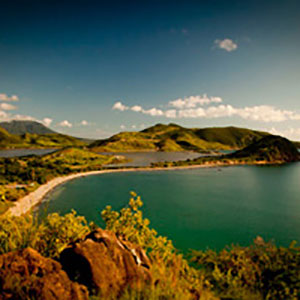 The islands of St. Kitts and Nevis, according to the official government site, have beautiful beaches, historic plantations, and now, reportedly, two well-known former diamantaires, Jatin Mehta and Nirav Modi.

And while it’s possible the two men were drawn to the islands’ great natural beauty, it’s also worth noting that the two islands reportedly have no extradition treaty with India. They are also considered a tax haven.

Mehta has reportedly been living there since 2013. His former company, Winsome Diamonds and Jewellery, says he moved to the islands for “personal reasons…much before [his company’s defaults] took place.”

Still, in the wake of Modi scandal, some are looking anew at the issues surrounding Mehta. This week it was reported that insolvency proceedings have begun against Winsome.

As the Indian publication The Wire recounts the Mehta affair:

How the Mehta case unfolded was simple: Winsome imported gold on the back of standby letters of credit given by Indian banks in favor of international bullion banks which supplied the gold. Winsome then used that gold to make jewelry that was exported to 13 clients in Dubai. The general idea was that Winsome would pay back the banks once they received payments from the Dubai clients. Winsome and Forever, however, have alleged that the buyers could never pay up due to losses suffered in alleged over-the-counter derivative bets.

The banks and CBI believe that all of Winsome’s 13 UAE-based buyers were allegedly in connivance with Mehta and that they siphoned off the funds.

Winsome has repeatedly professed Mehta’s innocence. Mehta himself has blamed a consortium of diamond people for the negative press about him—among them Nirav Modi and his uncle Mehul Choksi. Choksi, the former chair of Gitanjali Gems, has now also been caught up in a purported bank scam. His whereabouts are currently unknown, but he has also left India.

So it will be an irony if Modi, or his uncle, join Mehta on the islands. Yet, according to The Mumbai Mirror, that’s where Modi is looking.

“He has been planning this for a while now. In fact, he visited St Kitts along with his family last week,” said a senior diamond trader…

“Now that his passport has been revoked by the MEA, he will set up another diamond trading unit in either Singapore or Hong Kong,” said another old diamond industry hand who too did not wish to be identified. “He can do this and continue to evade Indian authorities, because neither of these countries will extradite him, since he will be a St. Kitts citizen soon.”

Modi’s attorney has suggested his client may return to India if he can be guaranteed a fair trial. He has previously declined to comment on Modi’s whereabouts.

This week, I sent Jatin Mehta an email:

I just noticed that Nirav Modi is said to be moving to the islands of Saint Kitts and Nevis. As someone who has lived there for a while, would you recommend them as a new home? What are good things for him to do?

I also noticed that, in the past, you suggested that Modi is behind some of the negative media reports of your situation. Now that he’s facing his own negative media reports, do you intend to welcome him to your new home? Will the past hostilities make things a little awkward for the two of you?

At press time, I have not heard back. In any case, it’s not clear that Mehta is completely island-bound, as other reports suggest he has been spotted at Pure Grown, the lab-grown diamond company owned by his sons.

But I hope as these two men enjoy their island home, with its undoubtedly nice beaches and friendly local population, perhaps they can spare a thought for their former colleagues in the industry, many of whom are still contending with the mess they have left behind.

(Top image courtesy of the government of St. Kitts and Nevis)