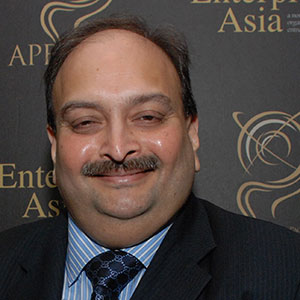 On Feb. 15, India’s Central Bureau of Investigation filed charges against Gitanjali Group and several of its top executives based on a complaint from state-owned Punjab National Bank.

The First Information Report (FIR), which can be seen here, charges Gitanjali Group managing director Mehul Choksi and four of the group’s directors with cheating Punjab National Bank out of $754 million by having bank officials issue fraudulent Letters of Undertaking (LOUs).

In a tweet issued today, India’s enforcement directorate, which tracks economic crime, said it has searched 17 locations across India related to Gitanjali Gems and Indian jeweler Nirav Modi. It later said it had seized gold and jewelry worth 5,649 crore rupees (approximately $849 million).

At press time, Gitanjali has not issued an official response to the new reports. The company’s spokesperson did not respond to a request for comment.

However, a Gitanjali source said that it is believed the new charges are not substantially different from the charges announced last week involving Choksi and Modi, who is his nephew.

That case charged Modi, Choksi, and two other family members with funneling 280 crore rupees (approximately $42 million) from Punjab National Bank to three firms—Diamonds R Us, Solar Exports, and Stellar Diamonds. In recent days, the number said to be involved has swelled to over $1 billion.

A Gitanjali regulatory filing issued Feb. 7 asserted that Choksi had been “falsely implicated” in the Modi probe. It said that Choksi has never had any dealings with Solar Exports or Stellar Diamonds, stating that he retired as a partner from Diamonds R Us in 1999 and since has had no “association or dealings” with the company.

Choksi “will be taking necessary legal steps to ensure that his name is removed from the list of accused in the FIR, as he has been falsely implicated in the first place,” the statement continued.

Indian news reports said that Choksi left India and his passport has been canceled for four weeks.

Nirav Modi’s whereabouts are also a mystery. According to press reports, he also left India in early January. While one report placed him in Switzerland, another report said he is staying in New York City at the Essex House hotel, close to the Madison Avenue jewelry store that bears his name.

Modi’s namesake retail chain, owned by his company Firestar, has three stores in the United States, in New York City, Las Vegas, and Honolulu. Firestar also took a majority stake in Sandberg and Sikorski in 2007.

Despite this, according to local news reports, India’s tax authorities are looking into bank accounts connected to Firestar.

The case has now also become a political issue in India, as Nirav Modi recently joined a group of Indian businessmen attending the World Economic Forum in Davos, Switzerland, along with the country’s prime minister Narendra Modi (no relation).