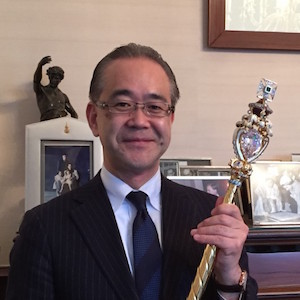 Kenji Saikachi (pictured) has been appointed the new chief executive officer of Royal Asscher of Japan, a subsidiary of the Royal Asscher Diamond Co.

Prior to joining Royal Asscher, Saikachi worked for K. Mikimoto & Co. for 27 years. He most recently served as brand manager of the pearl company’s main store in Tokyo.

Saikachi will be working closely with the Asscher family, as well as Royal Asscher of Japan’s sales and marketing team and its retailers and suppliers, to grow the brand’s business in Japan, a statement said.

In 2017, Royal Asscher opened a Tokyo flagship store. The next year, it debuted a boutique in Fukuoka, Japan, in the downtown Fukuoka Tenjin shopping district.

Royal Asscher has had a retail presence in Japan for more than a half century. In addition to its two flagship stores, the brand is currently in about 150 retail doors in the country,

The company, famed for the cut that bears its name, was founded in Amsterdam in 1854 by Joseph Isaac Asscher. It is now run by the family’s fifth and sixth generations: Edward, Lita, and Michael Asscher.

In 2011, the Queen of Netherlands awarded the Asscher family the royal title, in acknowledgement of its important role in the diamond industry.

“It is an extraordinary and exciting moment for me to be able to lead Royal Asscher of Japan,” said Saikachi in a statement. “Being able to work with the Asscher family, who are innovators with a pure passion for diamonds for over 165 years, is truly remarkable. Each of the six Asscher generations has taken the family trade and perfected it with new technology, innovation, and creative touches.”

Said company managing director and vice president Michael Asscher in the same statement: “We are fortunate to have someone of Mr. Kenji Saikachi’s caliber and experience step up to lead Royal Asscher of Japan.”