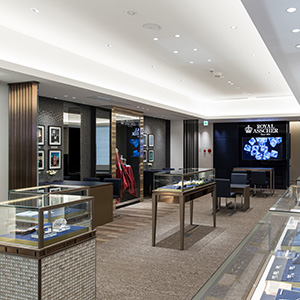 Royal Asscher, which opened a Tokyo flagship store in 2017, has bowed a boutique in Fukuoka, Japan—in the bustling downtown Fukuoka Tenjin shopping district.

Royal Asscher was founded in 1854 by the Asscher family (which still owns the jewelry firm) and has had a retail presence in Japan for roughly 55 years. The brand is currently in about 150 retail doors in the country, including its Tokyo flagship in the stylish Ginza district and the brand-new Fukuoka location, which is the company’s second Japanese stand-alone store.

Mike Asscher, vice president of Royal Asscher, explained the appeal of Fukuoka for the brand in a statement, saying the city “is a short flight from Hong Kong and Taiwan, a ferry ride from South Korea, and closer to Shanghai than Tokyo—and is seeing year-on-year record tourism numbers, which is great for exposing our brand further to audiences from these countries.”

He added, “Fukuoka has also developed itself to attract young, innovative, entrepreneurial people. It has bargain rents, low taxes, special visas, and trade incentives. All of which helped us identify this city as an ideal location for our second flagship in Japan.”

Royal Asscher is based in Amsterdam, and the fifth and sixth generations of the Asscher family are currently leading the company.

The brand’s legacy was solidified in 1907 with the Asscher-cut diamond—the 3,106 ct. Cullinan diamond that, at the request of King Edward VII of Great Britain, company cofounder Joseph Asscher famously cut and polished. It now lives in United Kingdom’s Crown Jewels.