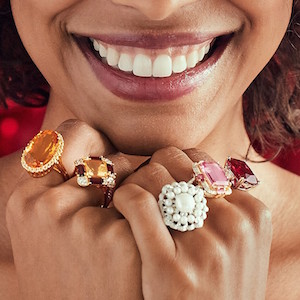 As part of the acquisition, former Brookstone CEO James Speltz, who has been LBH’s president since 2017, took on the role of CEO.

Darrell Ross, the son of Ross-Simons’ founder and a five-decade veteran of the company, has stepped down as LBH’s CEO but will remain a member of its board.

The acquisition “sets the stage for a whole new chapter of growth,” says Speltz. “Nonantum isn’t coming in with any particular agenda or strategy. They are supportive of management’s efforts to grow the business.”

Future plans include increasing Ross-Simons’ digital footprint throughout the United States and internationally.

LBH specializes in value-priced fine jewelry, and, unlike most jewelers, doesn’t sell bridal. Ross-Simons is perhaps best known for the catalog it launched in the 1980s. Today, its parent is focusing its efforts on digital, including sales via Amazon, Speltz says.

“Over the last four years, we have had a deliberate migration to being an e-commerce company,” Speltz says. “The core of the company is all things direct-to-consumer. That’s something our heritage catalog business set us up for knowing how to navigate successfully.”

Ross-Simons still prints the catalog, though Speltz says today “it’s a marketing vehicle, much like digital marketing. It’s one means of outreach, but most respondents are coming to the website.”

LBH has three brick-and-mortar stores: a Ross-Simons flagship in Warwick, R.I., and two Sidney Thomas Jewelers stores, in Short Hills, N.J., and Newark, Del. That’s down from a fleet that once numbered 15 stores. The Sidney Thomas nameplate debuted in 2013 in a bid to reach a more upscale customer.

In addition to digital marketing, Ross-Simons remains committed to one old-school medium—print. It still regularly advertises in newspapers like the Wall Street Journal.

“That gets our name out there and exposes us to consumers,” Speltz says. “We want to meet the consumer wherever she is.”

“That’s an exciting digitally native brand that is growing very rapidly,” says Speltz. “This acquisition [by Nonantum] sets us up for further brand development and other possible brand acquisitions.

This is not the first time LBH has been owned by an investment firm. In 2000, the firm Freeman Spogli purchased a majority share of Ross-Simons. Sixteen years later, it exited the company, by then known as LBH, following a management buyout.

Nonantum describes itself as a “middle-market private equity firm focused on investing in family and founder-led businesses, corporate carve outs, and complex situations.”

While Speltz admits the industry is going through a rocky period due to COVID-19, he is upbeat about its prospects.

“Jewelry brings people joy,” he says. “People buy jewelry to make themselves feel better. While it’s a tough time with regards to brick-and-mortar and many of the suppliers, we see those as temporary headwinds. They will thrive and recover when the world recovers.”