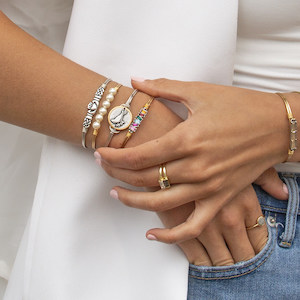 It’s all part of the new $6.2 million round of funding for 5-year-old Luca + Danni, which includes fresh capital injections not just from Ross-Simons but also from Boston-based venture capital fund PJC. PJC first invested in the brand three years ago  and will retain a minority stake in the company.

Luca + Danni founder Fred Magnanimi will remain chief executive officer of the company and board member, and he also retains an ownership stake.

He tells JCK that Ross-Simons and Luca + Danni will remain separate entities,

The brand hopes to use the funding to beef up its direct-to-consumer (D2C) presence, including possibly opening brick-and-mortar stores.

Opening stores “is something I’ve said I wouldn’t do in the past, but as an old boss of mine said, ‘I reserve the right to change my mind,'” Magnanimi says. “It’s something you have to do right. You look at Everlane and Glossier and some of these cool stores. It’s definitely something we are looking at.”

Ross-Simons is a jewelry retailer, and Magnanimi says it’s “possible” Luca + Danni will be sold at its stores, though it’s something that hasn’t come up yet.

Luca + Danni now makes about 70% of its sales D2C through its website, with a small part of that through Amazon. The rest is sold wholesale, primarily through gift and accessory shops. It’s also the only jewelry brand in the new Curated by Kohl’s collection.

“We love wholesale, and we want it to be a core part of our business,” he says. “But one of the challenges of wholesale is you don’t really get an understanding of the consumer.”

He believes that Ross-Simons will be able to provide the most support in its back-end operations.

“Marketing and advertising is getting more expensive, so to leverage the back end is really helpful,” he says. “That is often the weak spot in D2C businesses. Ross-Simons also understands the D2C space in a different way than we do.”

Both Luca + Danni and Ross-Simons are based in Cranston, R.I. Magnanimi says it’s possible they will combine their physical spaces, but there’s “no plan” for that now.

He says he spent a year looking for funding, but it’s not easy for jewelry companies to find the right partners.

“If you are AUrate or Mejuri or one of these high-flying D2C companies, that space is fairly good in terms of fund-raising. My sense with some of the [venture capital companies] is they are moving on to more traditional tech plays. They want fast-growing businesses, but they are also looking for businesses that are profitable or have an eye toward profitability. It’s different from early-stage direct-to-consumer businesses, where it’s growth at all costs.

“We feel very lucky to have found a great partner in our backyard,” he adds.

Magnanimi founded the brand in 2014. It is partly named after his younger brother Danny, who died from leukemia in 2013 at age 33.

In 2017, Ross-Simons’ parent Luxury Brand Holdings appointed Jim Speltz, the former CEO of Brookstone, as its new president. In addition to a catalog and website, Luxury Brand Holdings currently has five stores: one flagship in Warwick, R.I., and four Sidney Thomas stores in Boston; Newark, Del.; and Paramus and Short Hills, N.J., according to its website.