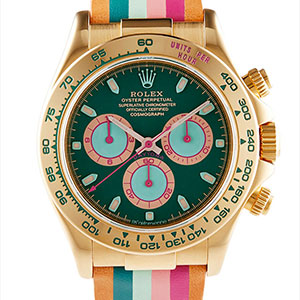 Rolex and La Californienne, a Los Angeles–based company that has won widespread plaudits for its candy-colored “reimaginings” of watches from Rolex and other brands, have tried to settle a copyright infringement suit brought by Rolex last year, though a California federal court has rejected their first attempt.

The two parties’ proposed settlement, presented to the court on May 21, was denied without prejudice by Judge R. Gary Klausner the next day for not fully addressing the two parties’ claims.

The proposed settlement seemingly allows La Californienne to continue to sell its souped-up Rolexes, but it forbids the company from publicly identifying the watches as former Rolexes, unless asked, or using any of the symbols or trademarks associated with the Swiss watch giant.

The settlement enjoins the company from:

– using Rolex’s registered trademarks—including its famed crown—or trade names in connection with the promotion or sale of its “altered” creations, or on its website or on search engines;

– engaging in any conduct likely to cause “confusion” regarding Rolex’s trademarks;

– associating its items with Rolex.

It also can’t provide any warranty services, repairs, or service any of its previously sold watches, if those services violate any of the agreed-upon terms.

La Californienne did win one seeming concession: “It can advise that [its] altered Rolex watches were formerly vintage Rolex watches, now modified,” but only “if asked.”

The proposed settlement resolves the case in Rolex’s favor on the charges of trademark counterfeiting, trademark infringement, and false designation of origin.

Rolex first filed suit against La Californienne on Nov. 15, arguing the company’s products were “counterfeits” that dilute its long-standing trademarks.

La Californienne responded that the modifications were permitted under the “nominative fair use” doctrine.

At the time of publication, La Californienne’s website simply listed the company’s name and no product. It did not return a request for comment by publication time.