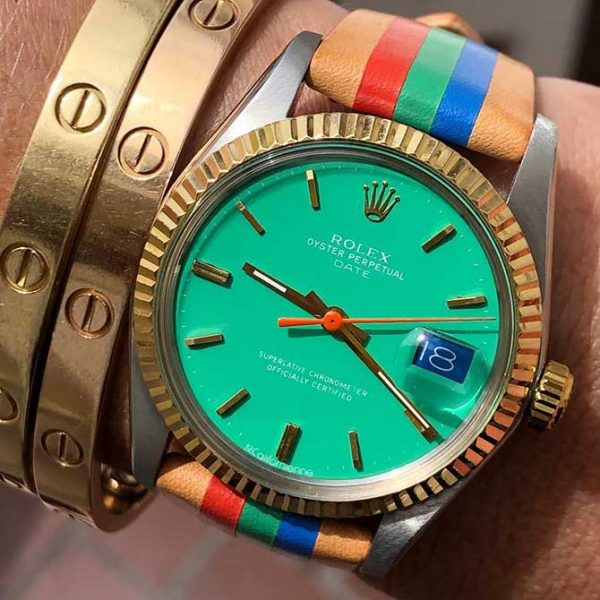 This summer, JCK’s Amy Elliott wrote that La Californienne’s “reimagined” Cartier and Rolex watches will either “thrill or horrify” you.

Put Rolex in the category of “not a fan.”

In a complaint filed Nov. 15 in California federal court, the Swiss watch giant dubbed the Los Angeles company’s candy-colored creations nothing but “counterfeits” that infringe on its registered trademarks.

It’s an unusual case that potentially threatens the business model of La Californienne, which is built on “restoring vintage timepieces and reimagining them in bold color.”

According to La Californienne’s terms and conditions, this reimagining involves giving the used watch a new crystal, bezel, and leather strap, and repainting its watch dial.

In its complaint, Rolex Watch U.S.A. argued that swapping out the watch parts means the new timepieces no longer “attain the aesthetic” of the original, and voids its two-year service warranty, as Rolex can no longer assure those watches’ “quality and performance.”

It charged that in two watches it examined—one of which was taken to a Rolex service center—the bezel was “not properly fitted to the watch.”

Further, the complaint contends that La Californienne “uses the Rolex Registered Trademarks to advertise and promote their watches in a manner which is likely to cause consumer confusion…and to deceive consumers into believing that the Defendants’ products and services are in some way authorized, sanctioned, or affiliated with Rolex, when they are not.”

The suit charges counterfeiting, trademark dilution, among other counts, and seeks an injunction against the company selling “infringing” products.

La Californienne tells JCK it is “aware” of the suit and disagrees with Rolex’s claims.

“We have engaged counsel, who specialize in this area of the law, to represent us, and they have advised us not to discuss the litigation, as it is ongoing,” says its statement. “Nevertheless, we stand behind our product and believe we will reach a favorable resolution.”

The Fashion Law, which first reported on this case, noted that this suit is potentially more interesting than the standard trademark battle, since Rolex’s claim revolves around its particular definition of a counterfeit—which, it says, encompasses any Rolex timepiece that includes non-Rolex parts

“As distinct from nearly every other product on the market, which can be altered freely by its owner without losing its status as an authentic good, the same is not true for Rolex watches, at least not according to Rolex,” The Fashion Law wrote.

It’s also noteworthy since La Californienne’s creations seem to have a following. They are sold by Gwyneth Paltrow’s company, Goop, and high-end L.A. store Maxfield, and have been covered in The Los Angeles Times and Vogue.

According to the Times, the business began when Courtney Ormond, a Los Angeles commercial stylist, received a Cartier tank watch as an anniversary gift from her husband, Leszek Garwacki.

“He chose a Cartier Tank because he thought it was the most standard-issue watch to get—a classic that would last,” she told the newspaper. “But the reason why he loved it was the same reason I grew tired of it.

“I started looking into buying a more interesting leather band, but there were no options for women’s watches. It struck us that we could design our own leather band with hand-painted stripes to brighten up the watch and make it unique. We then decided to refinish the dial. What resulted was our first watch.”

The two are now partners in the business, which Garwacki told The Los Angeles Times focuses on watches “we loved and admired.” It now finds itself facing a legal battle with a brand that has not returned its affection.