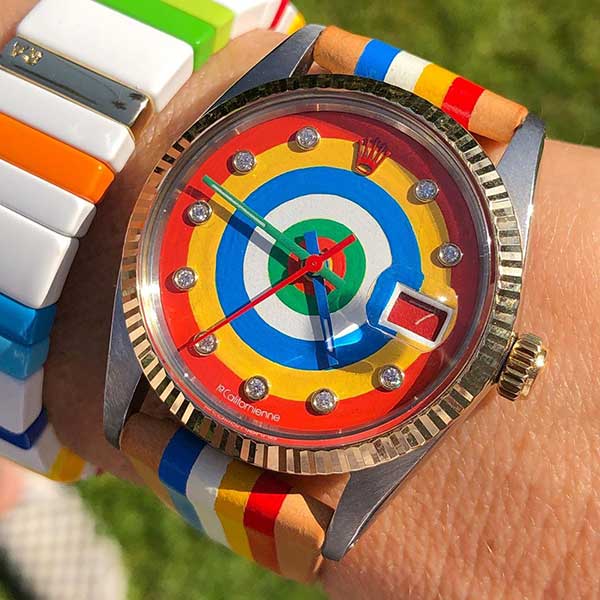 There’s a lot to like about the Los Angeles–based brand La Californienne, which recasts classic vintage Cartier and Rolex watches as something magnificently bright, colorful, and fun, each creation as whimsical, and richly detailed, as a carousel pony.

But the designs are also a little irreverent, causing perhaps more than a few people to consider whether Courtney Ormond and Leszek Garwacki, the brand’s husband-and-wife cofounders, are, well, a little wacky.

Because they’re literally buying some of the most coveted and collectible vintage watches on the market, hand-painting the dials and numerals and markers in lollipop colors and replacing the original straps with candy-striped, vegetable-tanned leather.

Which either thrills you or horrifies you.

The look: California cool meets magical unicorn, with a touch of preppie glam. It’s what you wear for for croquet on the lawn in Bel Air or over Aperol spritzes at a café somewhere in St. Tropez.

“There will always be a segment of the watch world who would be categorized as ‘purists’, ” says Ormond, who was a wardrobe stylist for several years. Garwacki has always been an avid vintage watch enthusiast and collector who possesses a wealth of knowledge about the category as well as a passion for it. The couple launched La Californienne in 2016.

“Initially, Leszek was a purist in terms of restoring vintage watches. It took some convincing from my end.”

“We are paying homage to the iconic designs and extending their interest by giving them a colorful twist,” says Ormond. “The watches we select might just stay in a drawer or a safe, and by reimagining them, we feel like we’re giving them a second life. We hope people consider what we do to be tasteful or at the very least well-crafted.”

And many important people do. Like the team at the Webster in Miami Beach, Fla., Ormond and Leszek’s first retail account. And Dierdre Roffoni, owner of Findings Inc., and her daughter Denia, who discovered the brand at the vintage pop-up in L.A. called A Current Affair.

Through Findings, which now represents the brand in New York City and Paris, La Californienne is carried by about 20 retailers in the United States, Canada, and Europe, including Barneys New York, Elyse Walker, Galeries Lafayette Champs-Élysée, Goop, and Browns in London, where the brand just wrapped a trunk show featuring the rainbow-clad vision pictured at top, among others.

Top: A vintage Rolex, exclusive to Browns in London, gets the La Californienne treatment in a rainbow palette, price on request (image via: la_californienne).