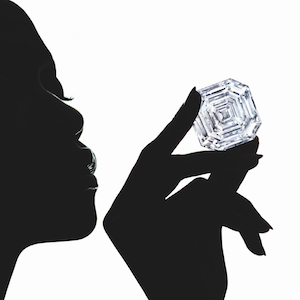 Graff Diamonds has taken the wraps off the 302.37 ct. Graff Lesedi La Rona, the largest gem produced from the record-breaking 1,109 ct. rough that sparked worldwide headlines when it was discovered at a Botswana mine.

The emerald cut has received a D color grade from the Gemological Institute of America (GIA), as well as the GIA’s “highest clarity” grade, Graff says. While that presumably means it received a grade of flawless, a company spokesperson beat back repeated inquiries about its clarity.

“I can disclose it is the largest highest-color, highest-clarity diamond ever graded by the GIA,” the spokesperson said.

It is also considered the world’s largest square emerald cut.

The Graff Lesedi is now being held in a secret location. It is available for sale, though the company declined to put a value on it. Graff does not expect to put it up for auction.

The Graff Lesedi La Rona was cut from a headline-making 1,109 ct. rough diamond discovered in 2015 in Botswana. Following a nationwide contest, the original stone was dubbed the Lesedi La Rona, which means “our light” in Tswana, the official language of Botswana. It is considered the largest gem-quality rough discovered in the last century and the second-largest piece of rough ever found.

The stone was purchased by Graff in 2017 for $53 million, following a failed auction at Sotheby’s.

Finding the best way to cut this piece of rough—which Lucara originally hoped would be left intact—was a painstaking process, the company said. Cutters were at first unsure they could produce a gem that would meet the 300 ct. threshold, though in the end they got there with 2.37 cts. to spare.

“Like a game of chess, our expert team had been strategically planning, anticipating and problem solving the cutting and polishing process of the Lesedi La Rona for more than 18 months,” said company founder Laurence Graff in a statement. “We would never get a second chance at cutting this momentous stone.”

In addition to this 302-carater, the original Lesedi has also produced 66 satellite stones.