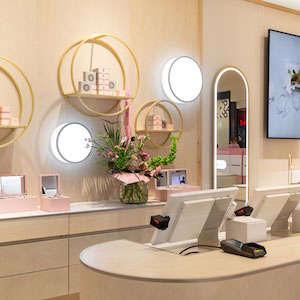 Pandora’s results have improved, though the jeweler is “not out of the woods yet,” executives admitted on a conference call following the release of its fourth-quarter earnings.

The Danish charm maker’s comps fell 4% in the year’s final quarter—an improvement over the final quarter of 2018, when they fell 7%. Overall comps fell 8% in fiscal 2019.

The improved results show that “our decline can be reversed,” said president and chief executive officer Alexander Lacik, crediting its Programme Now strategy.

“Our thesis from earlier in the year has proven right,” he said. “Pandora has not invested enough in marketing.”

He noted that after expanding its advertising and relaunching the brand this summer, unaided brand recall jumped 30% and Google searches rose 15%.

Still, the company expects comps to continue to decline in 2020.

“We are still in a turnaround,” said Lacik. “We have more consumers coming to the brand in the fourth quarter of ’19 versus ’18. That’s a good sign. But we are hesitant to just draw out the line and say this will be a slam dunk for 2020. We know that there will be quarters that will go up and down.”

He said that the company was looking at possibly getting back into multi-brand stores—after cutting hundreds of jewelers from its network a few years back.

“There hasn’t been an awful lot of attention to multi-brand stores in the last few years,” admitted Lacik. “The push has been owned and operated and [franchise stores]. We have seen there are some opportunities that we have forgone by reducing the multi-brand presences so much. A lot of new customers might come through a multi-brand rather than a concept store.”

But Lacik said the results from them so far were mixed.

“Some of the stores have been in the market for 10 weeks, which is super early in the curve,” he said. “[We don’t] have a conclusive picture that says, yes, we’ve nailed it, let’s go.”

He said the company’s commitment to become carbon-neutral by 2025  “is important for the company and for me personally. We have a responsibility as the world’s largest jewelry company to reduce our greenhouse gas emissions.”

And while the company plans to reboot its brand in China, the outbreak of the coronavirus has for the moment scrambled those plans, forcing the company to temporarily close some 70 stores.

“We have seen empty streets in China,” said executive vice president and chief financial officer Anders Boyer on the call. “It’s quite dramatic. The situation is highly unpredictable.”