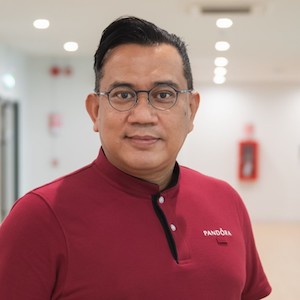 Puranasamriddhi joined Pandora in April, after 12 years overseeing jewelry manufacturing in Thailand and Vietnam at Marigot, a subsidiary of Swarovski. He has also led supply chain and manufacturing operations for various multinational companies in the watch industry in Switzerland, the United States, Hong Kong, China, and Thailand.

There will not be a replacement for Puranasamriddhi’s current position as senior vice president of manufacturing. The change is part of Pandora’s new operating model, which the company announced in March.

As part of the announcement, responsibility for supply and distribution will move from the group’s operations to its commercial operations under newly appointed chief commercial officer Martino Pessina, who joined Pandora in March. This is meant to drive a stronger connection between supply, distribution, and consumer demand.

The company recently announced that it would use only recycled gold and silver in its products. Currently, 71% of the silver and gold in Pandora’s jewelry comes from recycled sources.

“I would like to congratulate Jeerasage and welcome him to the executive leadership team,” said Pandora’s chief executive officer Alexander Lacik in a statement. “Jeerasage holds a very strong track record in managing jewelry manufacturing, and he will build on Thomas Touborg’s legacy. With supply and distribution moving closer to the demand side of the business, we [will] work to strengthen collaboration across our value chain in support of growth. Our focus will be to [forge] close connections from product and crafting to marketing and retail, creating an organization that can act quickly to changing consumer demands.”