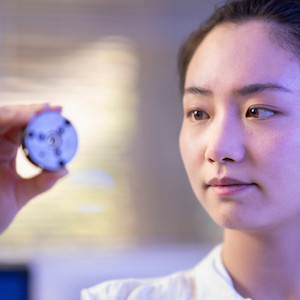 Scientists at the Australian National University (ANU) and RMIT University, also in Australia, recently sparked worldwide news coverage when they created two synthetic diamonds with a new method that uses a large amount of pressure rather than of heat.

One of the diamonds created is “the kind found on an engagement ring,” according to an ANU statement, while the other is a Lonsdaleite, a type of diamond found at the site of meteorite impacts.

However, professor Jodie Bradby of ANU’s Research School of Physics tells JCK she doesn’t believe the new method will be used to create gems.

“I don’t think our findings will impact the jewelry or diamond business,” she says via email. “We are targeting the industrial diamond market with the harder-than-diamond material. Our process does not rival the [chemical vapor deposition] technology for regular diamond growth.”

However, if commercialized, the discovery could possibly impact lab-grown diamond companies, some of which also create industrial diamonds.

Standard methods used to grow diamonds in labs require a large amount of heat, equal to that of the sun. The process uses a large amount of energy and casts doubt on some lab-diamond makers’ claims of eco-friendliness.

This new method, which was detailed in the journal Small, can grow diamonds at room temperature, but it uses a large amount of pressure—what ANU described in its statement as “equivalent to 640 African elephants on the tip of a ballet shoe.”

In the statement, Bradby compared the process to the way Superman turned coal into a diamond by crushing it in his hand.

“The twist in the story is how we apply the pressure,” said Bradby in the statement. “As well as very high pressures, we allow the carbon to also experience something called ‘shear’—which is like a twisting or sliding force. We think this allows the carbon atoms to move into place and form Lonsdaleite and regular diamond.”

She said Lonsdaleite has the potential to be 58% harder than regular diamond.

“Creating more of this rare but super useful diamond is the long-term aim of this work,” she said in the statement.