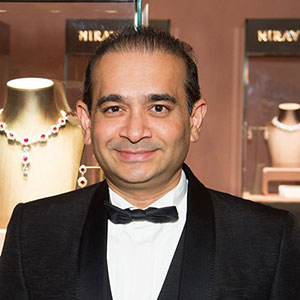 First, they distanced themselves from what happened in India. (An A. Jaffe statement said it is “not in any way involved with any of the alleged conduct [overseas].”) Second, they filed for Chapter 11. Third, given that three companies were generally considered successful, with combined sales of more than $100 million, they hoped for a quick sale. That would give them a fresh, untainted start.

Unfortunately, it hasn’t worked out that way. Initially, the sales process received inquiries from 52 companies. In the end, though, just four companies participated in the May 3 auction for A. Jaffe’s assets. The winning bid came in at $8 million, even though the company was valued at $21 million. Firestar and Fantasy received no all-asset bids, and their sales were put on indefinite hold.

In a motion filed May 12, chief restructuring officer Mark Samson blamed the dwindling interest on an Indian law passed April 23: the Fugitive Economic Offenders Ordinance. Introduced following the Modi scandal, the ordinance raised the possibility of a fugitive offender’s property being confiscated.

“I believe that it is probable that a sale of the A. Jaffe assets absent the India-based fraud allegations and the related actions by various authorities in India would have yielded higher bids for a going-concern auction,” Samson wrote. “However, A. Jaffe cannot change those circumstances or the current environment.”

Meanwhile, PNB, while not listed as a creditor in the case, has been quite vocal in raising questions about the sales process and the businesses. In a motion filed May 23, the state-owned bank noted that two of A. Jaffe’s largest creditors—Pacific Diamonds FZE and Tri Color Gems—were both listed as exporters on Modi’s allegedly fraudulent LOUs.

According to PNB’s motion, at a May 15 court hearing to approve the A. Jaffe sale, it was alleged that, at one point following the Chapter 11 filing, company president Mihir Bhansali had been in communication with Modi. As a result, Judge Sean Lane held up sales approval, requesting more information on those possible communications as well as the company’s valuation. Shortly after, Bhansali resigned as president, and debtors’ counsel said he would not appear at a future court hearing, according to PNB. On May 19, the debtors’ counsel withdrew the sale motion.

It’s not clear where this all goes from here. The sales withdrawal was done without prejudice, so it’s possible it can be refiled. A. Jaffe’s spokesperson said the brand still plans to exhibit at the JCK Las Vegas and LUXURY shows next week, and that all the sides are “still talking.”

However, following the sales cancellation, PNB and U.S. trustee William Harrington both filed motions requesting a Chapter 11 trustee. (The court has already appointed an examiner to comb through the companies’ books.) Harrington’s motion asserted that if a trustee isn’t appointed, the case should be converted to a Chapter 7.

In his motion, Harrington argued that while the debtors have not been charged with any wrongdoing in the criminal investigation of Modi, at this point the Chapter 11 cases can’t be “divorced” from the issues surrounding the companies’ majority owner.

Modi, he wrote, “still lurks in the background.”

At press time, the debtors’ counsel had not responded to the motions.