However, comps declined at what might be termed traditional Signet. They dropped 1.9 percent at Kay; 7.8 percent at Jared; and 6.7 percent at its U.K. division (H. Samuel and Ernest Jones). Comps also fell 11.2 percent at its regional nameplates, a category that now includes Gordon’s and Canadian chain Mappins.

Overall, comps rose 0.6 percent in North America for the quarter, but fell 0.1 percent overall. That was above expectations, as Signet had warned it expected same-store sales to be down all year. Regardless, it is maintaining its prior guidance, citing tougher comps in the rest of the year.

The improved results were driven by rising sales of bridal and fashion jewelry. Top bridal brands included its Enchanted by Disney Fine Jewelry, Neil Lane, and Vera Wang Love collections, though sales of Ever Us declined. Fashion sales were driven by gold jewelry and new rings.

In a conference call following the release of its financial results, CEO Virginia “Gina” Drosos (pictured below) said that the company still aims to trim $200 million from its budget over the next three years, with one-third of those savings coming over the next year. 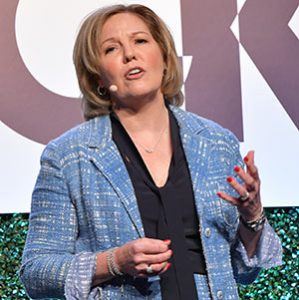 Drosos also still expects to close 200 stores over the next year, though it will open some stores as well, all in off-mall locations.

She noted that Signet’s North American division had been reorganized, with each store banner now having a dedicated general manager.

“We believe these organizational changes will enable greater focus on the customer, increased accountability, and improved product assortment and newness,” she said.

The results at Kay were an improvement over past quarters, which Drosos credited to a better handling of the credit changeover, as well as more innovative products in stores. Sales at Jared lagged because “it has been the slowest getting our [new] initiatives in place,” she said.

Drosos also discussed how the company plans to differentiate its store banners, noting the company continues to research that issue.

Research shows that Zales appeals to a “more fashion-oriented consumer … someone looking for the latest trend,” she said. “Our Vera Wang brand does quite well at Zales. I expect to continue to move Zales in that direction.”

By contrast, Kay appeals to those who want to “commemorate a moment or relationship.”

In response to a question, she characterized the jewelry category as overall “healthy,” adding that “we are continuing to see growth in the three to five percent range that we have seen over the last number of years.”

She also hoped that Signet would lead the industry in developing new products for new occasions.

“I gave the keynote address at JCK [Las Vegas], which is [the] big industry conference, and I talked about how, instead of just focusing on Mother’s Day and Valentine’s Day and holiday, we have an opportunity to win more birthdays, more graduations, throughout the year,” she said. “The data analytics I talked about on the call—how we’re now able to target parents before graduation events, we’re able to target gift-givers around birthdays and [events] like that—those will continue to allow us to have more personalized and targeted messaging going forward, and hopefully be able to grow the category.”

Drosos said the company sees a lot of opportunities in boosting the in-store experience, including introducing augmented reality and virtual reality elements.

Mary Elizabeth Finn (below, left) has been named chief people officer and will oversee human resources. She will previously chief human resources officer at Nielsen, the former owner of National Jeweler and the JA New York show.

Stephen E. Lovejoy (below, right) has been named chief supply chain officer. He joins the company from Glanbia PLC, a $2.8 billion nutritional foods company, and prior to that, he served as senior vice president of global supply chain for Starbucks. Lovejoy will be “focused on agility and efficiency in our supply chain,” Drosos said, as well as cost savings. 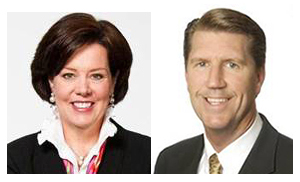 (Top and above images courtesy of Signet Jewelers)