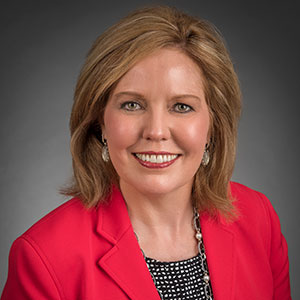 The comp decline wasn’t surprising, as the fourth quarter encompasses the holiday season, and Signet had already announced that comps had declined over the holiday. Total sales for the quarter came in at $2.3 billion, a 1 percent increase over last year. That increase was due to an extra calendar week and the addition of R2Net, parent company of James Allen, which reported a 35 percent sales increase.

In a conference call following the release of its financial results, CEO Gina Drosos (pictured) mostly blamed the decline on a bumpy transition to outsourced credit. She noted that sales at the Zales chain had risen 5.1 percent, despite falling comps at Jared (6.4 percent) and Kay (11 percent), in part because Zales wasn’t impacted by the credit transition.

She added that she expects fiscal 2019 comps to remain negative, and Signet’s performance isn’t expected to improve until fiscal 2020.

As part of that plan, Signet will reduce its store footprint. It expects to close 200 stores in the upcoming fiscal year, mostly after the Christmas holiday.

Drosos also predicted that new store openings will be limited and be concentrated in off-mall formats and locations.

She noted that approximately three-quarters of the stores expected to close are in the same mall as another Signet store, so the company hopes to retain 30 percent of the business lost by the closing stores.

– Signet, once famed for flooding the TV airwaves with holiday ads, is now prioritizing digital.

“TV will remain a competitive advantage for our brands,” Drosos said, “but will no longer comprise the majority of our spend.”

– It hopes to grow digital sales to 15 percent of total revenues by 2021. They currently comprise 8 percent of revenues.

– She believes that the company “has become too promotion-oriented” in a way that “confuses consumers” and “hurts brand equity.” It’s doing a pricing study to find out a best way to price its products.

– She also felt that the company has gotten into a “situation of sameness across [its] banners” and plans initiatives to differentiate the merchandise at its different store names.

– The company is also looking at new “urban store concepts,” in part to attract millennial shoppers.

– Signet has completed the final stage of its credit outsourcing program by selling its non-prime in-house credit card receivables to investment funds managed by CarVal Investors, which will allow Signet to divest itself of the credit risk relating to those receivables.

Signet will receive $410 million to $435 million from the transaction, which will be used to repurchase stock. Genesis Financial Services will continue to service the non-prime accounts.

– The company has appointed two new directors for its board: Sharon L. McCollam, who served as executive vice president, chief administrative and chief financial officer for Best Buy; and Nancy A. Reardon, who served as chief human resources and communications officer for Campbell Soup Co. from 2004 to 2012.

Both new directors are women. A press release noted the company, which has had its share of gender issues over the years, now has an equal split of men and women on its board.