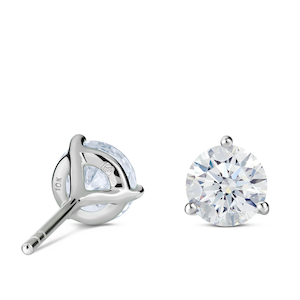 Keeping with its standard $800-per-carat pricing, the brand is offering for pre-order 2 ct. t.w. lab-grown diamond studs for $1,800. For that price, you get two 1 ct. solitaires and a $200 10k white or rose gold setting. They are available in Lightbox’s standard white, pink, and blue stones, though the white version has already sold out. (It’s currently offering only earring settings in gold, though silver settings are available for other styles.)

For those who want individual white 1 ct. solitaires, Lightbox chief executive officer Steve Coe says they are now readily available, despite early complaints they were hard to find.

Coe says that “when we originally launched, we saw $1,000 as a bit of an upper limit. But what we’ve seen in practice is that there is a bit of a willingness among consumers to go higher.”

He says it’s possible that Lightbox might eventually offer 1.5 ct. and 2 ct. solitaires, if it feels there’s consumer demand for that product.

On the lower end of the scale, Lightbox is also offering ¼ ct. t.w. pieces for $250, including the setting.

Coe says that the Lightbox brand has been set back a bit due to COVID-19.

“Like other businesses, we saw quite a down curve in late March and early April, and we did hold back some of our marketing spend,” he says. “But what’s encouraging from Mother’s Day onward, we were seeing particularly on our e-commerce platform a pickup in business. We are not quite where we expected to be, but we are close. We are cautiously optimistic for the rest of the year.”

While it’s canceled its plans for a series of pop-up stores, it says that last year’s brick-and-mortar retail tests with Reeds and Bloomingdale’s went well, and it hopes to announce other brick-and-mortar partners later this year.

The construction of the Lightbox production facility near Portland, Ore., has also been slightly delayed due to COVID-19, but it hopes to be producing this year and to reach full production in 2021, Coe says.