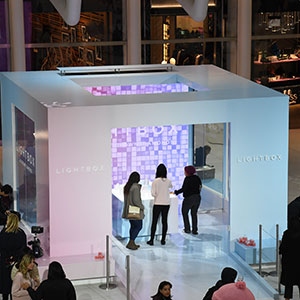 De Beers’ lab-grown diamond brand has just popped out of its box.

The 400-square-foot walk-in cube, slathered in pastels and anchored by a giant ever-changing video screen, debuted at the 2-year-old mall on Nov. 26, Cyber Monday, and will run through Saturday, Dec. 2. While the pop-up displays the company’s product line, no items are available for sale, though store staff have iPads to direct shoppers to the Lightbox e-commerce site.

The brand sees the temp store as an opportunity to showcase its jewelry, which is available online only for now, says Lightbox general manager Steve Coe.

“With jewelry, a lot of it is the consumer actually seeing the product. We [wanted] to raise the profile of the brand for consumers, but also to have the opportunity to interact with consumers and get some feedback about what they thought of the product.”

He says that the pop-up has already driven a few sales.

“What we see, and we also saw this in our research, is that when consumers see the product, they become more interested,” he says.

The Oculus was chosen because of the sheer amount of people who pass through it, says chief marketing officer Sally Morrison.

“We wanted to go somewhere that [gets] an intense broad population,” she says. “To me this is like a billboard to get people comfortable and understand and trust what Lightbox is as a brand,” Morrison says.

Using the white marble Oculus as a backdrop “seems to be the right kind of staging for a modern accessories brand,” she adds.

The brand is also running ads on screens through the Oculus and adjoining shopping centers.

Morrison hopes the pop-up will clear up what she sees as consumer confusion about lab-grown diamonds.

“Some people don’t understand the difference between lab-grown diamonds and simulants. They think it’s the same as CZ, for example. I think people don’t really know, generally, what this product is.”

The company will experiment with other pop-up stores next year, Coe says, but he doesn’t foresee an actual retail store. Next year it will announce its first brick-and-mortar partner.

Sales on its e-commerce site “have done very well so far and exceeded our expectations,” Coe says. “We are pleasantly surprised how well it’s gone.”

The most-talked-about, if most elusive Lightbox offering—the 1 ct. non-total-weight white stone for $800—was on display at the Oculus, though it’s been repeatedly sold out on the site, fueling speculation that De Beers doesn’t plan to truly offer it.

But Coe says more 1 caraters will appear on the site this week and next. And, in fact, the site did have them in stock at press time.

“They have sold out a number of times,” he says. “Our suspicion is that there are quite a few trade buyers buying them, to benchmark the quality and so forth. We always said there would be 1 ct. product on the site, and there is, and there will be more coming through in the future and other 1 ct. designs as well.”