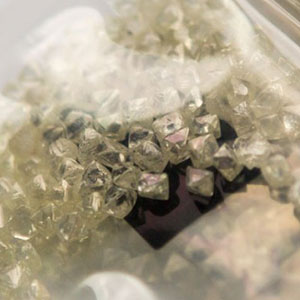 Production of lab-grown diamonds has risen dramatically and will continue to do so, though their prices will likely continue to fall, said a new report from Bain & Co.

The report, produced for the Antwerp World Diamond Centre, estimates current lab-grown gem production at 2 million cts. a year, with the majority of that under 0.18 cts. It estimates that production is currently growing at 15–20 percent annually.

It reports that it costs $300–$500 per ct. to produce a CVD lab-grown diamond, compared with $4,000 per ct. in 2008. It calculates that the retail price of gem-quality lab-grown diamonds has fallen by about half in the past two years, while wholesale prices have fallen threefold. It forecasts that trend will continue as efficiencies increase, new competitors enter the market, and the product gets “commoditized” like natural diamonds.

“Lab-grown diamonds are clearly here to stay,” the report says, pointing to De Beers’ entrance into the market and the Federal Trade Commission’s decision to remove the word natural from its definition of  diamond.

“Given the pace of declining production costs and wholesale and retail prices,” it adds, “we expect lab-grown stones to become accessible to a wider consumer audience.”

However, in the short- and medium-term, it says that the man-made market will be constrained by limits on manufacturing capability, funding, and access to technology and intellectual property.

A lot depends on how much consumers embrace the product. It suggests three possible scenarios for how this could play out: In the first, customers no longer perceive a difference between natural and lab-grown diamonds except for the highest-quality stones. In the second, the natural segment does differentiate itself, perhaps by limiting lab-growns to the fashion category. The third is “some combination of the two,” where naturals are differentiated in every category but low-end stones.

Regarding natural diamonds, the report estimates that diamond jewelry sales rose an unimpressive 2 percent in 2017, but suggests that this year’s number may be higher, led by strong U.S. demand. It forecasts continued growth in the diamond jewelry market, though it warns that a protracted trade war between China and the United States could hurt consumer confidence in both countries.

Rough diamond production spiked 19 percent in 2017 to reach 151 million cts., ending an eight-year trend of flat output. Yet, last year may represent the “pinnacle” of rough diamond production, and the report expects that the mine output going forward will be “flat at best” as existing mines get depleted.

Both rough and polished diamond prices trended up during the first half of 2018, by 3 and 2 percent, respectively, though last year the price of polished fell 3 percent.

Profitability in the midstream—dealers and manufacturers—equaled about 1–3 percent. India continues to dominate the cutting and polishing segment, manufacturing more than 90 percent of world production, with its market share continually growing.