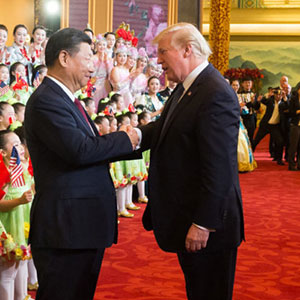 The National Retail Federation has expressed relief that President Donald Trump has decided to delay an increase in tariffs on Chinese goods that was scheduled to go into effect in January 2019.

Trump had previously threatened to levy 25 percent tariffs on $200 billion of Chinese goods after the new year. That list included several items that are used in the jewelry business. Those goods are currently subject to a 10 percent tariff, which the United States imposed in September.

But after meeting with Chinese President Xi Jinping at the G20 summit in Argentina, Trump decided to put the 25 percent increase on hold for 90 days—although there was initial confusion about when that 90 days started.

White House national economic adviser Lawrence Kudlow initially told reporters that the 90-day cooling-down period started Jan. 1. However, the next day the president tweeted that it actually started Dec. 1. The White House later corrected Kudlow by crossing out “January” and writing “December” in a transcript.

Regardless, many in the retail industry hailed that the two sides seemed to be—at least temporarily—stepping back from the brink.

National Retail Federation president and CEO Matthew Shay said in a statement that he was happy that the administration has decided to “give diplomacy a chance.

“It is clear the administration has heard the voices of those negatively impacted by existing tariffs,” Shay said. “We hope this 90-day tariff pause will lead to a positive resolution that removes tariffs altogether and improves U.S.-China trade relations.

A White House statement  said that, in response to the cease-fire, China would purchase a “not yet agreed upon, but very substantial” amount of goods from the United States.

Trump later tweeted, “Not to sound naive or anything, but I believe President Xi meant every word of what he said.”

Some economists were more skeptical. One J.P. Morgan analyst wrote in a note to clients, “It doesn’t seem like anything was actually agreed to at the dinner. White House officials are contorting themselves into pretzels to reconcile Trump’s tweets (which seem if not completely fabricated then grossly exaggerated) with reality.”