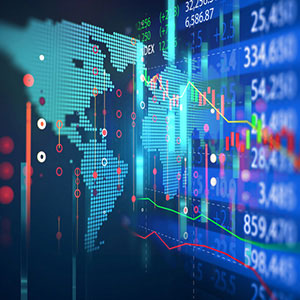 Wall Street has been rallying in recent weeks. (Friday morning was an exception.) That is generally a sign the economy is recovering. The unemployment rate is 7.9%—which is still extremely high but a huge improvement over what it was a few months ago.

Yet, more and more economists are looking at what’s happening to the average American and the average small business. There, the picture isn’t so pretty.

A recent survey from the National Federation of Independent Business found that one in five small business owners may have to close their doors if economic conditions do not improve.

The U.S. Census Bureau’s Household Pulse survey showed that 22 million adults—or 10% of Americans—say that their households sometimes didn’t have enough to eat in the last seven days. An estimated 13 million adults living in rental housing — 1 in 6 adult renters—were behind on rent in early September, and some 25% of renters with families have fallen behind with their rent.

For a while, there was a debate over what form the post-lockdown recovery would take: Would it be V-shaped (a sharp downturn, followed by a sharp upturn) or U-shaped (where the economy drops, stays on the bottom for a while, and then goes back up)?

Instead, many think what we’re seeing is a K-shaped recovery, where the rich—the top part of the “K”—get richer, and everyone else either suffers or gets worse.

As Beth Akers, a labor economist with the Manhattan Institute who worked on the Council of Economic Advisers under President George W. Bush, told Politico we are seeing a “tale of two recessions. There are so obviously complete communities that have been almost entirely unscathed by COVID, while others are entirely devastated.”

While it’s common for recessions to hurt those on the bottom the most, economists are calling this “the most unequal recession” in history—“delivering a mild setback for those at or near the top and a depression-like blow for those at the bottom.”

According to the Economic Tracker, unemployment among high-wage workers is down 1.6%, while it’s down 16% among low-wage workers.

Part of this is technological. White-collar workers, like myself, can work from home with new technologies. But not everyone has that luxury.

Yet, even among people in more “traditional” businesses—such as retail—the hurt isn’t being spread around equally.

We are also seeing this in things such as executive bonuses. It is not exactly a secret that the gap between the salary of the average worker and top corporate execs has grown exponentially; one study said that the average CEO now makes 278 times the average American worker.

It was refreshing, and a bit surprising, when CEOs and board directors took pay cuts when COVID-19 began. Those cuts may have saved thousands of jobs.

But in just about every case, the corporate layoffs and furloughs ended up being permanent, while the CEO salary cuts were only temporary. Some were particularly upset when, right before it filed for bankruptcy, J.C. Penney handed out $10 million in bonuses to its top executives—many of whom already make millions a year. Their boards argued that they need bonuses to “retain” these executives, though it was never clear why they would want to retain executives who have driven a company into Chapter 11, while at the same time shedding the people who actually make the place run.

For all this, let’s add a couple of caveats. First, the so-called hourglass economy has existed for some time. COVID-19 has just made it worse. In a 2018 (pre-COVID) study on the “great retail bifurcation,” Deliotte wrote:

Despite positive macroeconomic trends, it’s actually been an abysmal period for most Americans. For the past 10 years, the lower 40 percent income group has found itself struggling to keep up with expenses, while the middle 40 percent has seen its income shrink. Thus, for 80 percent of consumers, the last decade has generally represented a dramatic worsening of their financial situation. Income and net worth gains are disproportionately going to the highest-income group.

As Joseph Brusuelas, chief economist at RSM, told CNBC: “The K-shaped recovery is just a reiteration of what we called the bifurcation of the economy during the [2008] financial crisis. It really is about the growing inequality since the early 1980s across the country and the economy.”

That said, not everyone agrees that a K-shaped recovery is inevitable. U.S. Treasury Secretary Stephen Mnuchin recently said, “Let’s not get lost on different letters of the alphabet…. There are certainly parts of the economy that need more work.”

Obviously, it’s hard to generalize about something as large as the American economy. Different regions and different businesses have different experiences. We are hearing a lot of upbeat reports from jewelers, particularly with regard to bridal sales. Still, most economists agree the general trends are clear.

So, what does this mean for the jewelry industry? It will could also lead it to bifurcate more toward high-end and low-end product. That trend was happening already, and this will likely intensify it.

You see it in Tiffany & Co., which was generally considered an upscale brand and yet had plenty of affordable product. That was a key to its success—it let everyone own a piece of its magic. Now, the jeweler has been criticized for not being high-end enough.

Or take a look at Lord & Taylor. In 2019, Helena Foulkes, the former CEO of its previous owner, Hudson’s Bay Co., said that one of retail’s most storied names was stuck “in the toughest part of retail: the middle…. [It’s] neither the high-end luxury where you can really own it, nor is it a low-cost…discount retailer.”

A few months later, Lord & Taylor was sold, and then shortly after that, it went out of business after nearly 200 years. Which was bad news for its hundreds of employees, though less so for its top executives: They received more than $1 million in bonuses.