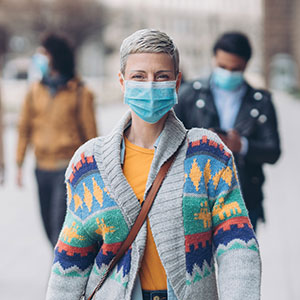 In April, the Centers for Disease Control and Prevention recommended that everyone wear face masks in public settings, citing studies that show they are effective in reducing the spread of COVID-19. Mask wearing has since become mandatory in many workplaces, including, now, the White House.

Last week, Costco, which has long required its employees to wear masks all day, announced that its shoppers must wear them too.

“We believe the added safety is worth any inconvenience,” said president and chief executive officer Craig Jelinek. “This is not simply a matter of personal choice; a face covering protects not just the wearer, but others too.”

Afterward, RetailWire asked its panel of retail experts of whether Costco, and a long list of other retailers, was making the right move by requiring masks. The ensuing thread, which I recommend everyone read, drew an interesting exchange of ideas, though almost all the answers were along these lines:

Mark Ryski, founder, chief executive officer, and author, HeadCount Corp.: Retailers have an obligation to provide a safe environment for the employees and shoppers, regardless of how politically incorrect [that might be]. Countries that have had the best results in minimizing spread, such as South Korea, have adopted face masks en masse. If some customers don’t feel comfortable with or don’t agree with face masks, they are free to shop at other stores.

Ricardo Belmar, retail transformation specialist: [T]he point is to mitigate risk, and if that means enforcing a little inconvenience for shoppers, then so be it. We currently stand at 65,000+ people dead in this country, with over 1 million infected. Out of respect for the dead, how can we not tolerate a little potential inconvenience? If it saves even one life it will be worth it.

Mask wearing has become a requirement at many jewelers too. Rhett Outten, owner of Croghan’s Jewel Box in Charleston, S.C., has a basket by the door and is making all her customers wear one. Outten, who has had respiratory issues, says she’s been guided in this by advice from her brother, who’s a doctor.

“He just says, ‘You cannot mess around with this,’ ” she said on the latest JCK podcast. “He’s been very serious about us taking this seriously and [telling us], in no uncertain terms, not to relax at all. Who cares about a sale if someone gets sick?”

In some jurisdictions, wearing masks is now mandatory when in public. In others, it isn’t. Some jewelers have been “strongly encouraging” or “politely asking” customers to wear masks. The implication is clear: They want customers to wear them. They don’t want to force them to.

It seems they are afraid. They don’t want to make people mad. Costco received blowback for its decision on social media. It’s also received support. Regardless, social media outcries generally make little difference to businesses in real life. On a recent Centurion webinar, Scott Weisman, principal of Meyers Jewelers in Grove City, Ohio, said so far only one customer has declined to follow his store’s mask policy, and the store was able to work something out with him.

Plus, some customers may be happy with the new policy. People could feel unsafe if they look in a store and see a bunch of naked faces. A recent survey found that nearly 75% of Americans plan to wear masks regularly.

Last week, my colleague Emili Vesilind wrote about how major retailers  are opening their stores:

[Macy’s] will have new guidelines for safety: ear piercings and makeup sampling and application won’t be allowed (makeup artists will use testers on face charts), there will be no bra fittings, dress shirts cannot be tried on, customers will be required to use hand sanitizer before trying on jewelry and watches, and alteration services will be suspended.

At Apple’s newly reopened stores in Australia, customers must not only wear masks but also have their temperature taken before they enter the store.

Compared to all that, asking customers to wear a mask is pretty mild—especially since, in many cases, the people serving them have to wear them all day.

Recently, CNN probed why some people don’t wear masks. Many don’t like to be told what to do—certainly something I sympathize with. They consider it an abridgment of their freedom and their rights.

But legal experts say that, as long as you’re not discriminating against a particular group, no one has a “right” to enter a store. According to Tiffany Stevens, president and CEO of the Jewelers Vigilance Committee, a mask policy is in the same category as saying, “no shirt, no shoes, no service.” Plenty of nightclubs, restaurants, and even stores have customer dress codes. (One store has even said, “No masks allowed.”) If someone enters a jewelry store looking like they’ve been sleeping out on the street for four days, they will likely get the heave-ho. After all, customers don’t just need a mask to get into a Costco; they also need a membership card.

In fact, not taking strong precautions could increase legal liability, Stevens says. There’s talk of legislation that would provide employers with a liability shield against COVID-19 lawsuits. But that hasn’t passed yet, and even if it does, it may not extend to consumers.

“If someone gets sick and accuses you of getting them sick, you want to show that you have done as much as you have done to protect them,” she says. “[Any claim] can cause a lot of stress and further interrupt your business.”

She recommends that stores not only have strong safety policies but have those policies written down and well-documented. (Other JVC advice for reopening can be seen here.)

Some stores have legitimate security concerns about people wearing masks. John Kennedy, president of the Jewelers’ Security Alliance, has traditionally warned retailers to be wary of anyone with their face covered. Now that masks are the new normal, he says retailers can no longer be sticklers about this. He adds that a mask that just covers a mouth and nose isn’t a great way to hide a face.

Here are the JSA recommendations:

Criminals trying to conceal their identity ordinarily will use more than a surgical mask, and will use hats, hoodies, and sunglasses in addition to a mask. Some people at the door may be wearing scarves, bandannas, or rolled T-shirts rather than masks. If a jeweler feels someone is trying to conceal their identity, or is not sufficiently protected without a mask, the person shouldn’t be admitted to the locked store at all, whether they remove the mask or scarf outside or not.

Other JSA advice for reopening can be seen here.

Mask policies need to be carried out in a thoughtful, considerate, and respectful way. If someone doesn’t have a mask on hand, have some available. Some retailers may even want to have their store’s name branded on them. If the customers keep them, that’s free advertising.

The policy shouldn’t be a surprise. Retailers should inform consumers of it ahead of time. It should be posted conspicuously outside the store and mentioned on social media and websites.

Retailers also shouldn’t use mask wearing as an excuse not to follow social distancing and other COVID-19 protocols—which some think could be an unintended consequence of mask wearing.

Plus, stores need to be consistent: If that’s the rule, they should stick to it.

“If you decide that your standard is that everyone wears a mask, then you don’t make exceptions for the person who says, ‘I just don’t want to do it,’ ” said Kate Peterson, owner of Performance Concepts, on a recent Jewelers of America webinar. “You have to err on the side of caution, because your job is to protect everybody, not just one person.”

The brick-and-mortar business will get back on its feet only if consumers and employees feel comfortable going to stores. (Jewelers of America’s guidance for reopening can be seen here.) A lot of states are opening up, but that means little if consumers are too scared to leave their homes. It’s also possible that if infections and deaths increase, and COVID-19 spreads to previously unaffected areas, states will shut down again—possibly in the fourth quarter, which would be the worst possible time for jewelers. And since jewelry stores are nonessential businesses, they will be among be the first to be ordered closed.

At one Walmart in Worcester, Mass., 81 employees tested positive for COVID-19. The city ordered the store closed. In a second Walmart in Quincy, Mass., several employees got sick and one died. That store’s been closed too.

If an infection is traced to a jewelry store, it might be forced to close, like those Massachusetts Walmarts. And even if it isn’t, it’s tough to run a store when most of the staff is out sick.

No business is nonessential to the person whose livelihood depends on it. Retailers need to show that stores can operate responsibly, with a minimum of health risks.

Jewelers have sacrificed an enormous amount during this lockdown period. They’ve lost money. They’ve lost employees. Some may lose their business. In reopening, many are taking safety measures that are both extensive and expensive. Why jeopardize that? If a store lets in just one sick person without a mask, all that sacrifice could end up for naught.

Wearing masks isn’t ideal. They take getting used to. They aren’t natural.

But taking care of your health is generally not pleasant. I’m not a big fan of brushing my teeth or colonoscopies. But neglecting your health usually leads to something worse. As Jeff Sward, founding partner of Merchandising Metrics, said on RetailWire, wearing masks “is uncomfortable. But so is being hooked up to a ventilator.”

If nothing else, selling jewelry is about building connections. The weirdness of wearing masks is a good conversation starter.

My perspective has been shaped by living in New York City. I know ER doctors who deal daily with COVID-19, I know people who have lost family to it, and I have heard firsthand how terrible it can be. It can be hard to wrap your head around all these precautions when the disease is not close to you. When it was limited to a nursing home in Washington state, I didn’t take it that seriously. Neither did many people in my city. That was a mistake. There are many today who would do anything to change that.

Ultimately, it’s up to jewelers to protect their employees, their customers, their businesses, and their families. Masks are simply another way of increasing store safety, like an alarm or buzzer system. If a retailer feels a customer should wear a mask, they shouldn’t just politely ask them to do it. They should politely require it.