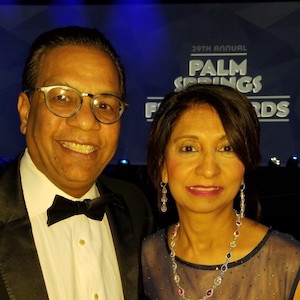 In mid-March, just as the world was realizing that COVID-19 had turned into a global pandemic, Raju Mehta noticed his brother, Atul, had developed a cough. A few days later, Raju got one too.

It was the start of what the owner of El Paseo Jewelers, in Palm Desert, Calif., now calls one of the worst periods of his life.

Mehta comes from a family that’s heavily involved in the jewelry business. One of his brothers, Prakash, runs Interings. Another brother, Pravin, and nephew, Nicky, run Diamond Days. Raju has built his store into one of the largest and most-respected jewelers in the area. He’s had good times and bad, including an encounter with notorious jewel thief Doris Payne. But he’s never gone through anything worse than what happened last month.

When this pandemic is over, we will all have stories about what we experienced, what we saw, and how we coped. Those stories will range from tragic to inspirational.

After Atul—who works in Los Angeles’ downtown jewelry district, and lives with his brother and his wife—developed the cough, the family quarantined themselves in their house, staying away not only from the outside world but from each other.

Raju called to get tested for COVID-19, but he was told that since he didn’t have all the symptoms, he couldn’t get a test. He and his brother received medications from their doctors. Raju’s symptoms stayed mild. Atul’s did not.

A few days into the quarantine, Raju was taking a nap when he received a call from his wife, Jaishri. His brother was screaming.

“He had passed out and come to his senses. He had heart issues and thought he was having a heart attack,” says Raju.

Raju—who still wasn’t sure if he had COVID-19 or a mild flu—and his wife went to check on him. They weren’t crazy about the idea of being close to someone so sick, but they “had no choice,” Raju says. “Do I save him or try to save myself?”

He massaged his brother’s chest and they called for an ambulance. It’s possible that incident was when Raju’s wife contracted COVID-19.

Atul was taken to the hospital, but doctors sent him home, since he didn’t have all the COVID-19 symptoms. (He later went back and was sent home again.) He spent the next few weeks recovering.

The morning after Atul’s episode, Jaishri, who had preexisting lung issues, felt itching in her throat. A day later, she felt tightness in her chest, and she was admitted to the hospital. On the third morning of her hospital stay, the doctor sent her to the intensive care unit. The next day, she was taken out of the ICU, and five days later, she was sent back.

“At one point, the doctor told me that they had done a CAT scan and her lungs were very bad and she went back to the ICU,”  Raju says. “They talked about putting her on a ventilator. She bid me a final goodbye. I told her, ‘I’m not taking it.’ ”

They laid her on her stomach, and she started to improve. All told, she spent three weeks in the hospital.

It’s now nearly two months since the family first got COVID-19. Jaishri and Atul still suffer from occasional weakness and have problems doing things such as climbing the stairs.

“It’s like you have to retrain your body,” Raju says. “I like to say, we hit the jackpot. All three of us got it. And we all suffered in a different way.”

What struck Raju is that COVID-19 is a “very lonely disease.

“You cannot even take care of your loved ones. You can do FaceTime, but you cannot wipe someone’s tears or hold their hands and tell them everything is okay. You cannot do that.

“My wife was 23 days in hospital in one room. She was in complete isolation. The only person she saw was the nurses. Even in jail, you can still go in the yard and see other inmates. Here, there is no seeing anyone but yourself.”

All three have since tested positive for the disease. But given that scientists still don’t know whether patients can be reinfected, they are erring on the side of caution.

Mehta’s store has been closed since mid-March. He doesn’t do online sales, so he’s had no money coming in. He’s applied for a Paycheck Protection Program loan but has not heard from his bank—and is upset by reports that big companies have received funds while small companies like his have been left to languish.

He plans to reopen when California Governor Gavin Newsom gives the OK, which should be in the next few weeks. But he’ll be careful. A lot of his clientele is over 60. He’ll wear a mask and gloves. All surfaces will be frequently cleaned and wiped. His store is big enough that he can do proper social distancing. He plans to stay six feet away from customers. His store was known for holding parties and social events; those are on hold. For the moment, he doesn’t think he’ll require customers to wear a mask and gloves, though he’ll post a sign “politely” asking them to do so.

He’s been heartened by the outpouring of support he’s gotten, particularly after he told his story on a local news channel, where he disagreed with those who compare this disease to the flu.

“My wife, my brother, and me, we have all had flu over the last 30 years. We have never come close to dying.”

The disease has proven particularly lethal in the United States, where it’s now infected more than 1 million people and has killed more than 70,000—a higher death toll than any other country in the world.

Raju’s message to the industry is: “Don’t think you are invincible.”

He adds, “I have a four-minute show segment with NBC every week, and before [the store] closed, my last statement was, ‘Be careful, but enjoy your life. Don’t let this change your life.’ If you ask me now, that was the wrong statement.

“I don’t want people to think everything is okay and not be responsible. I want to make sure that they’re not killing each other unnecessarily because that’s what is going to happen if people are not careful. I nearly lost two people in my life. I could have been here doing this interview alone.

“This is a very dangerous virus. It’s very easily transmitted. I have seen the worst of it. People need to be careful.”