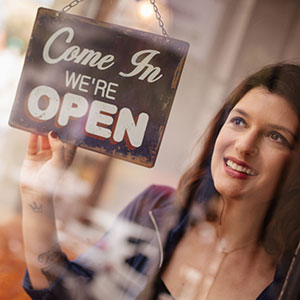 Many jewelry stores will be reopening in the next few weeks, but the new normal of COVID-19 could present certain security challenges for jewelers.

Social distancing guidelines generally recommend having a limited amount of people in the store. John Kennedy, president of the Jewelers’ Security Alliance, recommends that retailers should keep their doors locked and have an employee or security guard stationed at the door, and that person should admit only a limited number of people at a time.

While social distancing was not designed to fight crime, it can have security advantages, too, says Larry Spicer, vice president of loss prevention and risk management at Jewelers Mutual.

“From a security perspective, limiting the people who come into your store is a good thing,” he says. “It allows you to better watch who is in there.”

The other big question revolves around masks. The Centers for Disease Control and Prevention recommends that people wear them when out in public. Jewelers, however, have long been trained to be wary of masked customers, as that’s generally a sign someone is hiding their identify.

Kennedy believes that retailers should accept that masks are a part of life from now on—and he recommends that whoever is at the door insist that customers don a mask before they come in.

They should, however, be wary of anyone sporting items such as hats, hoodies, and sunglasses in addition to a mask, as that could mean they are trying to hide their face. If a jeweler feels someone is trying to conceal their identity, don’t let them in the store, Kennedy says.

Some jewelers have been asking customers to remove their masks. Kennedy says he is “not a believer” in that for several reasons: First, it has obvious health risks and may violate the law. But it also doesn’t really increase security, since a simple mask doesn’t do much to conceal someone’s identity.

“I don’t think it’s going to make you much safer,” he says. “If you want them to do it, have them do it while they are outside the store. If you ask them to do it while in the store, they may leave. And if you’re dealing with a real criminal, you may also provoke a violent confrontation.”

Jewelers may also shorten or adjust their store hours, so they are not the only store that’s open in an area.

“That’s an open invitation for criminals to come after you,” Kennedy says.

Kennedy notes that more jewelers are engaging in curbside pickup and offers the follows guidelines for jewelers who choose that option:

– Watch out for criminals who may be waiting nearby, possibly in a car, watching the store, putting both the jeweler and the customer at risk.

–   Curbside pickup of repairs or pre-ordered items should be paid for in advance by credit card.

– Two employees should cooperate on the delivery. One should surveil the area and handle the door while the other goes to the car to drop off the item.

– Pickup should be by appointment only, and customers should supply a description of their car and license plate number when making their appointment.

–   Curbside pickup should be done only in a designated area, as close to the front of the store as possible, and visible from inside the store. Arrange the pickup location with the customer when they make their appointment.

– Let the local police know that the store is reopening, as well as your curbside pickup plans, so they can add extra patrols to the location.

Spicer says most jewelers have avoided break-ins while closed, since they have followed standard security advice and stored all their items—even low-end ones—in safes or off the premises.

“There may well be a pent-up explosion of crime at jewelry stores by professional criminals who have had to be inactive or new criminals, such as financially desperate people and drug addicts,” warns JSA’s newest bulletin.

Kennedy says that jewelers should continue to engage in standard security precautions, such as not resisting a robbery, putting pieces away, and showing only one item at a time.

More info and more tips can be seen here and at the JSA website.