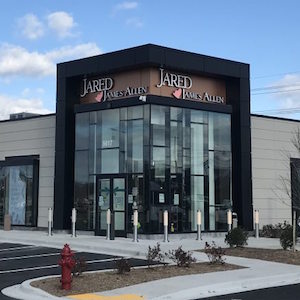 He went to Jared. And James Allen, too.

James Allen, which Signet bought in 2017, is based in Frederick.

The new Jared x James Allen store will occupy 4,245 square feet just outside of the city’s Francis Scott Key Mall. That is somewhat smaller than a traditional Jared location, which has an area of approximately 6,000 square feet, says Signet vice president of corporate affairs David Bouffard.

The new store features what it calls a “modern, warm, and relaxed” environment.

Differences from the standard store include a coffee bar, which also serves treats, and a James Allen Gathering Table (pictured, below) that lets consumers touch and try on replica rings. In addition, instead of the traditional case displays, the new store lets customers walk around the display for a full view from all angles. Jewelry consultants work side by side with guests rather than in the traditional behind-the-case position.

“Our collaboration with James Allen allows Jared the opportunity to create a new and richer experience for our customers and create a modern environment for jewelry shopping,” said Bill Brace, chief marketing officer of Signet and executive general manager of Jared, in a statement.

James Allen opened a solo concept store last year in Washington, D.C. This appears to be the first instance of two Signet brands joining together in the same location, although chief executive officer Gina Drosos has raised the possibility of Piercing Pagoda presences inside other Signet stores.