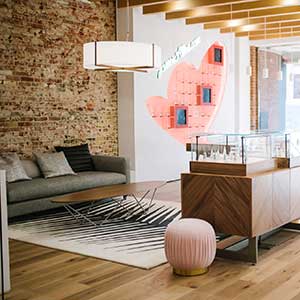 The new James Allen store in Washington, D.C., will serve as a “laboratory” for new retail concepts that can possibly be adapted by other Signet nameplates.

“If something works well, we’ll take it to other brands,” says Oded Edelman, president of JamesAllen.com and Signet’s chief digital innovation advisor. “Signet gave us a lot of freedom to experiment. When you have 3,000 stores you aren’t always able to do that.”

The technology-heavy store, located on M Street in the younger-skewing Georgetown neighborhood, aims for a casual, informal vibe and includes couches and a cappuccino bar.

“It’s not a store,” Edelman says. “It’s more of a place you can hang out. It’s a place to feel comfortable.”

Many of its neighbors are also e-tailers branching out into brick-and-mortar, such as Warby Parker and Rent the Runway.

It doesn’t even look like a jeweler from the outside, he says. “Up front it just looks like another cool store. You see people outside saying, ‘What’s James Allen?’ ”

The interior also tries to set itself apart. “It’s not packed,” Edelman says. “Most jewelry stores are usually packed with product, and it all runs together.”

The first part of the store includes a long table—like those found in bakery chain Le Pain Quotidien—where people can try on cubic zirconia and silver rings by themselves without the help of salespeople.

Elsewhere, an aquarium-like case features the site’s best-selling items, and a virtual reality area gives a three-minute crash course in the Four C’s.

Toward the back are different rooms, all separated by walls made of plants.

The plants “give it a bit of fresh air,” Edelman says. Consumers who step on certain points near the plants can hear sounds aimed only at them, like birds chirping.

The rooms include an appointment area, a computer, and a case stocked with fashion product such as pendants and earrings.

Like Blue Nile’s showrooms, the store doesn’t stock much actual diamond product—unless a customer asks to see it by appointment. But associates have iPads to help customers order from the site.

“They can sit on the sofa with you and help you browse rings,” he says.

An app on the store’s iPad uses technology from Mystore-E, an Israeli company that has received investment from Signet’s venture capital fund. The technology can scan a person’s gender, age, and color preferences and then suggest product.

“If you are wearing green clothing, we show you green emeralds,” he says.

Edelman says it’s too early to say if James Allen will open any more stores. “This is a trial. We will see how this works. We’ll find out more in six months to a year.”

He says the store plans to add even more tech features after the new year as well as host events.

And while traffic so far has been good, the e-tailer is hedging its bets: When the store’s not busy, associates will use their downtime answering calls from the site’s customer service line.