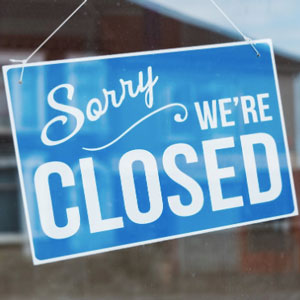 The impacts of the COVID-19 pandemic have resulted in the largest month-to-month drop in retail sales in U.S history.

The Census Bureau’s report on March 2020 retail sales, which was released Wednesday, revealed that U.S. retail sales declined 8.7% month-to-month compared to February. Advance estimates of combined U.S. retail and food services sales for March 2020 were $483.1 billion, which is also 6.2% below those of March 2019.

Jewelry sales aren’t tallied on their own in Census reports, but clothing sales were down 51% percent; furniture and home furnishings dropped by 27%; restaurant sales fell 27%; motor vehicles were down by 26%; and sports/hobbies/books saw a 24% drop from February.

The lone bright spot was food. Grocery store sales for the month were up 26%, as Americans stocked up on consumables throughout the month, fueled by anxieties over not having enough and/or what they need during mandatory quarantines.

The largest one-month drop previous to March happened in the fall of 2008, in the midst of the late-aughts financial crisis, when retail sales fell 4% for two consecutive months.

Retail is a major economy driver and accounts for one in 10 jobs in the United States. The closures of stores and retail-related businesses due to the pandemic contributed to the largest surge in unemployment claims in history in March. According to the Department of Labor, roughly 22 million Americans have applied for unemployment since March 14, representing roughly 13.5% of the country’s total labor force.

The drop in sales is also accelerating the woes of retailers that were already on the ropes financially.

On Monday, both Macy’s and Gap—two companies that have been weathering financial woes for years— announced they would furlough a sizable percentage of their workforces (a combined 200,000-plus people). Nordstrom also said it would be furloughing employees for a minimum of six weeks. Smaller retailers operating with smaller safety nets are laying people off in droves. Rent the Runway and Everlane, to name two, have collectively laid off hundreds employees.

As the pandemic recedes in the coming months, the retail industry will start its recovery. But the timelines for business reopenings—and witnessing the return of foot traffic to public places including shopping centers and stores—is unknowable at this point.

But a few outcomes of the pandemic seem all but assured: A number of retailers that were flailing before the crisis will close for good. Consumers, when they come back to spending, will spend on different, more meaningful things. Jewelry, which doesn’t degrade and represents portable wealth, could benefit from that shift. And after the crisis is over, Americans will be much more comfortable shopping for absolutely everything—from 60-foot sofas to 6 ct. diamonds—online, which could reshape the retail landscape considerably.