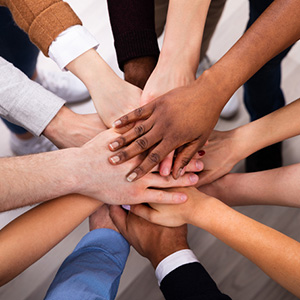 Victoria McKay had spent six years at the London Diamond Bourse before she decided to create a passion project: the Women’s Jewellery Network, an international group designed to promote women in the diamond and jewelry industries. (The group deliberately didn’t target the United States, where the Women’s Jewelry Association is already established.)

This week, McKay reluctantly folded the WJN—a victim, somewhat, of COVID-19, as it had to scuttle plans to do an in-person conference. But McKay had gotten a job outside the industry and could no longer spend her time running it.

She still thinks there is a need for an industry-wide conversation on inclusion and equality.

To some extent that conversation has started. Jewelers of America (JA) recently held a webinar on diversity and inclusion, which can be seen here. Its host, JA’s chief financial officer Annie Doresca, noted it was the first conversation on this topic she had seen in her 13 years in the industry.

During the webinar, John Hall, chief information officer of the Gemological Institute of America, said that the industry will have to change to meet the needs of the new consumer.

“We’re seeing a diverse demographic,” he said. “Let us just accept that there is a moral component [to diversity], and there is a financial component. The coming demographic is digital native, in favor of sustainability, and they look at what you stand for as a company.”

So how does the industry diversify itself? Both GIA and Signet said they are trying to increase their recruiting.

“There is an outreach that needs to happen,” said Hall. “We need to create awareness that there are careers in this business.”

Angely Martinez, who helped compose a letter that called for a BIPOC jewelers group, said in the webinar that the industry needs to offer mentorship and internship programs aimed at underrepresented groups.

She noted that information some take for granted—such as how to attain a line of credit—is not always available to new designers.

“There’s lot of people who are lost. They are talented people that need to feel like they are welcome in the industry.… We don’t want handouts. We have worked really hard just like anyone else. We were not born into a jewelry business. We want to create long-term opportunities. We need new talent to keep the industry going. I can’t relate to someone who is a fourth- generation gem dealer. They can’t relate to me. We still have a long way to go. Little by little, we can get there.”

After articles ran about the new group, a lot of people called up and offered support, she said.

“People need to take time and think about how they can support this,” Martinez said. “Maybe they can do a blog or trunk show series with emerging designers. We are still in COVID, we are not expecting people to make a big change overnight. But people can have one thing that they can implement.”

Dr. Benjamin Chavis, the veteran civil rights activist and the founder and director of Diamonds Do Good, says that the industry needs to make a long-term commitment to diversifying itself.

“This can’t be just the latest fad, but it has to be something that’s really implemented by the industry genuinely and authentically,” he says. “One of the things about the diamond industry is it’s multigenerational. There is still an opportunity to open the door a bit.

“We live in an increasingly diverse world. In order for global companies or industries to continue to be profitable and impactful, all companies have to be leaders in ensuring that the companies themselves reflect diversity and inclusion…. That will ensure the industry will have greater longevity and, I believe, greater consumer support.”

He notes that diversity is not only being more inclusive as far as race and gender, but also in terms of age, as the industry needs to draw more young people.

McKay believes the industry needs to undergo a cultural shift.

“Diversity and inclusion is much more of a given outside the industry. It is going to affect the industry as it falls further and further behind. When I worked in the diamond industry, people were great at putting together committees in dealing with topical issues. But in the wake of Black Lives Matter, there hasn’t been a global advisory group for what has been set up as a global problem.

“The industry needs to focus on this. If we put the same effort into discussions on this topic as we do to the grade of a diamond, you might see a lot more profit in the future.”

McKay notes her group “quickly engaged a loyal following,” showing there was a need for an organization that addressed these issues.

“It was incredibly interesting to meet some of the talent that are not just the regular names and have different conversations—not just about lab-grown diamonds,” she says.

She enjoyed her time in the industry and wishes she could stay in it—and she looks forward to participating in it as a consumer.

“It’s a nice set of people. They don’t mean to have all these biases. There is just a resistance to change.”

Update: The number of years McKay spent at the London bourse has been corrected.