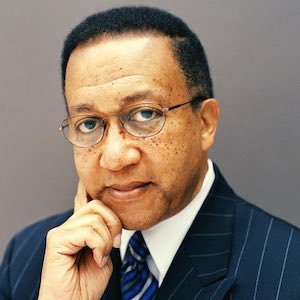 Dr. Benjamin Chavis Jr. (pictured) has been active in the jewelry industry since 2007, when he cofounded Diamonds Do Good (formerly the Diamond Empowerment Fund), the industry nonprofit that supports charities in the communities where diamonds are mined and cut. He remains an executive committee member of the group’s board.

Chavis also has a long history of civil rights activism. A member of Martin Luther King Jr.’s advance team, he garnered international fame as a member of the Wilmington Ten, who were falsely convicted of arson and conspiracy in 1971. The case was reversed on appeal, and the charges were dropped after key witnesses retracted their testimonies. (You can see him talk about the experience here.)

Chavis later served as the executive director of the NAACP and as national director of the Million Man March. His activism continues today: He and his children took part in the Black Lives Matter demonstrations that followed the death of George Floyd at the hands of Minneapolis police.

Here, Chavis discusses his reaction to recent events, how the jewelry industry should respond, and whether the industry has an issue with diversity. This interview occurred on Juneteeth, which commemorates June 19, 1865, the day slaves in Galveston, Texas, learned they were free.

JCK: You have been a part of many demonstrations over the years. Some have said that this most recent spate feels different. Do you find that?

Ben Chavis: If you compare what is happening in 2020, to what was going on in the 1960s, back then you had some Jewish Americans, some Latinos, joining in, but those marches were primarily African Americans. These new protests are truly multiracial, multicultural, multilingual. That’s a big difference. It’s also intergenerational, and they transcend socioeconomic stratifications. I see that as an evolution. There’s an outcry for equality that transcends race, that transcends gender, transcends class. It’s a much wider spectrum.

It is possible this is a tipping point, an inflection point. This outcry for equal justice and racial justice will not subside until there’s structural and systemic changes in American society. This is not just a movement of people in the United States. It’s been globalized. You have people in Africa protesting for social change in America.

As someone who was falsely convicted of a crime and spent time in jail because of it, is it distressing that these issues with law enforcement persist?

If you go back to 1968, the Kerner Commission issued its report about urban unrest. That was 50 years ago. What has happened in those 50 years? What I think we’ve learned is this is a systemic problem and we need to do systematic changes. We don’t need cosmetic changes or surface changes.

I don’t believe the police alone are the problem. I think the police have become a point of focus because of the lives that have been taken and the incidents that have been caught on video. Keep in mind, in the 1960s, we didn’t have social media. We did not have cell phones. We didn’t have video recorders in almost everybody’s hands like today.

Police reform is much needed, but we need to look at reforming health care, reforming education. Many of our neighborhoods are still segregated. COVID-19 exposed not just preexisting health issues in United States, but it also exposed systematic problems that have existed over the last five decades.

A lot of jewelry trade shows and events are not that diverse. How do we reach out to get more people of color involved in the industry?

I have been to the last 10 JCK shows. Over that time, I have seen a lot more people of color involved. That’s positive, but it’s not where we should be. I think that the future of the diamond and jewelry industry is contingent upon not only having more people of color as employees, but we’re also going to hopefully see more representation in the C-suites of major companies.

I believe the jewelry industry can play a leadership role in helping move toward more inclusive, fairer, more equitable solutions to the challenges that the world faces. So it’s all about looking in the mirror and companies and businesses looking at what we can do to not only prevent tragedies like these racial tragedies, but what can we do to help bring about a more just world, a more fair world, and a more equitable world.

Is there a specific thing you would like to see the industry do?

I would like the industry weigh in on the legislation right now before Congress called the Justice in Policing Act. It looks like it will pass the House, but it’s not clear if it will pass the Senate. That bill would be a step in the right direction. I think the jewelry industry will be a welcome voice to advocate for continuing social change, continued inclusivity in America.

There’s a lot of talk about corporate social responsibility. All companies now have a page on their website devoted to the good things that they are doing. And that’s good. What is being called for now is more outreach, more diversity, more inclusion.

When you look at De Beers moving its diamond sorting from London to Botswana, that was a very significant move. It had a positive impact not just on the economy in Botswana, which is a very stable democracy, but on all of southern Africa, and it’s become a model for how you source natural resources.

We often hear we need to have more “open conversations” and dialogue about race. Sometimes those conversations can be difficult. Any thoughts on that?

My day job is I’m head of the National Newspaper Publishers Association. You’d be surprised, that even at the journalism level, there’s not the kind of dialogue that should be going on. People are fearful to have an honest discussion about race and look at it from a systemic perspective.

What we should be writing about, in my view, is not just specific incidents of racial injustice, but we should be trying to foster what the solutions are, where we are going, and how can we get to where we need to go. I’m a great believer in dialogue. I think there should be webinars in the jewelry industry, virtual town hall meetings on this subject led by the industry.

Martin Luther King Jr.’s last book was entitled Where Do We Go from Here: Chaos or Community? And I think almost universally people would say they would rather have community than chaos. Remember after Nelson Mandela was released from prison in South Africa, the first thing he did was form the Truth and Reconciliation Commission. That shocked a lot of people. But he realized that to move society forward at some point you do have to reconcile. And I think right now the United States is searching for a quick fix, which I don’t think we are going to find. Just like there’s no quick fix to the COVID-19 pandemic, I don’t think there will be a quick fix to the epidemic of racial injustice. We will eventually get a vaccine for COVID-19. Will we get a vaccine for racial injustice in America? And what I mean by vaccine is, how do we resolve the deep-seated prejudice and deep-seated stereotypes and systems of oppression? I have to say that I’m hopeful, and I believe we are working toward it. I do think that the new bill that was introduced into Congress is a step forward.

Let’s talk a bit about the police. As you know, this is an industry with a lot of security issues. It has traditionally tried to nurture a good relationship with law enforcement because of those issues. Yet, as we’ve seen, not everyone has the same perception of law enforcement that the industry does.

A lot of jewelry companies and groups have sent out messages in response to recent events. There’s been a lot of talk about what is the right message to send out, what the tone should be. Any thoughts on that?

I think any communications need to be respectful and authentic. You always want to be open to a broader discussion.

Any discussion just can’t be a one-person approach, it shouldn’t just be an economic approach, we need an interdisciplinary approach where all the key stakeholders have something to say about what’s going on. We need to facilitate dialogues not just with communities in the United States but also communities around the world. This isn’t about changing one nation or one country or one issue. This is about how the population of the world can contribute to improving the quality of life for all people, no matter where they live, no matter what their nationality, and no matter what their current circumstances are. At the end of the day, all of us want to make a contribution to improving the quality of life for all of humanity.

What is next for Diamonds Do Good?

I think this is a providential moment for the Diamonds Do Good campaign. It has the opportunity to help shape the future in communities where diamonds are mined and produced, but to also help transform the diamond and jewelry industry globally. I think Diamonds Do Good can speak to the issues that are now being faced, not just in the United States but in other countries around the world.

There’s also the issue of millennials. One part of the transformative moment that we are now living through is the activation of so many young people. I think it’s very positive. It transcends race and socioeconomic circumstances. There’s a passion among the youth of America for a better society, and the jewelry industry should pay attention to the passion of millennials, to the outcry for inclusivity and diversity. And I think it will be important for the jewelry industry’s future viability to not be on the sidelines observing what is going on, but to be seen as an integral part of the process toward resolution.

I am optimistic. I agree with what Dr. King said years ago, “The arc of the moral universe is long, but it bends toward justice.” And I do believe that the arc is bending today in that direction.

(Images courtesy of Diamonds Do Good)