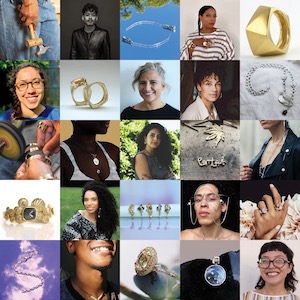 The group’s goals would include promoting diversity at different levels of the industry, from trade shows to retail floors to boardrooms; holding networking events (when it’s safe to do that); and funding scholarships, grants, and mentorship programs, as well as encouraging companies to do the same.

One obvious model for the new group would be the Women’s Jewelry Association (WJA)—as well as groups like the Indian Diamond & Colorstone Association, the Armenian Jewelers Association, and the Hebrew Immigrant Aid Society, which recruited many refugees to the diamond industry after World War II.

Its founding principles were spelled out in an open letter, which can be seen here, spearheaded by New York City jewelry designer Angely Martinez. It was signed by 29 BIPOC designers and endorsed by a similar number of groups and companies.

“We ask the jewelry industry to…recognize the vast, historical underrepresentation of BIPOC in the commercial facet of the industry,” it writes. “[F]or too long, you have been missing our voices in how the industry is shaped, nor have we had equitable opportunities for advancement in our careers. A swell of change is already taking place and it’s time for the jewelry industry to embrace this movement.”

Martinez hopes the letter will spur a larger conversation.

“There’s a lot of change happening, so I wanted to address it with the letter,” she says. “Instead of all of us coming forward with a separate point of view, calling people out, I thought it’s better to create a whole statement as a group and to put it out there, in a positive way, to create opportunities for us in the future, and to create other avenues for us to follow.”

She says that after nine years in the industry, she’s found that “there’s not a lot of programs to help BIPOC designers. Funding is a big issue. There’s a lack of BIPOC leadership in companies and a lack of BIPOC people on the sales floor.”

Michelle Orman, president of Last Word Communications, who is serving as a consultant for the project, says the new organization hopes to be up and running in nine months or so.

“The idea is that when BIPOC people come into the industry in the future, there’s a place they can go to, sort of like [how] WJA created an organization 40 years ago, to give women a place at the table,” Orman says. “We feel there’s strength in numbers. The reason there’s a WJA is because women face different issues than men, and, obviously, BIPOC women face different issues than white women.”

She says the group isn’t about “shaming people” or “pointing fingers” but rather calling attention to the issues BIPOC jewelers face. “They are here. But they don’t have the representation to get in front of Vogue and Harper’s Bazaar.”

Before the organization comes about, there might be a WJA “affinity group,”  as she notes it takes a bit of work getting an organization off the ground.

While the WJA is now an important organization in the industry, its origins were quite modest: It started in the early 1980s with a networking lunch, which led to a cocktail party, which then became a formal group.

The people behind this new association hope to build a similarly lasting legacy that will increase the number and prominence of BIPOC participants in the industry. While the current moment has generated many expressions of goodwill, they hope to build a solid infrastructure that will have an enduring impact.

“We’re looking at ways to engage the industry long term,” says Jules Kim, founder of Bijules, which hosts the Bijules Incubator, which helped give Martinez her start. “We’re really trying to open the industry, to diversify the people who run it and contribute to it, but ultimately also diversify the end users who buy our products. We’re trying to create guidelines to build a more well-rounded industry.”

Anyone wanting to get involved in, support, or stay informed about this effort, can email JewelryIndustryTaskForce@gmail.com.